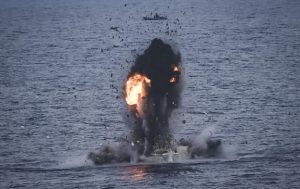 The European Union Naval Force (EU NAVFOR) reported on Tuesday that it had destroyed an abandoned ship from which Somali pirates were assaulting boats sailing off the coast of Somalia towards the Indian Ocean, like reported by plenglish.com.
A Hong Kong-flagged carrier was among the targets the bandits operating in those waters tried to hijack from that boat, adds a report by the military institution.

The pirates shot at the ship, but the attack was unsuccessful, the source continued.

The abandoned ship was towed into and completely destroyed to prevent further attacks.

Piracy off the more than 3,000 kilometers of coastline of Somalia, one of the scourges of those waters, has decreased considerably over the last 10 years, due to the presence of EU and NATO warships in that part of the Indian Ocean.

According to data from international organizations, no such action has been successful in the area for more than a year and a half.