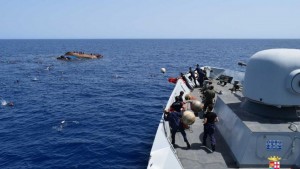 French lawmakers are calling into question a European naval operation that was put in place in 2015 as a response to the global migration crisis. A parliamentary report on the state of the French navy in the Mediterranean says that Operation Sophia has not lived up to expectations. like reported by rfi.fr.

The European operations is supposed to fight people-trafficking networks that operate in Libya and on the Mediterranean coast and has been responsible for saving more than 32,000 people off the coast of Libya.

“It does a wonderful job on its humanitarian mission. And it’s fortunate it is there,” French MP Eric Ciot, one of the authors of the report, told RFI.

But he says that saving people is not the operation’s primary mission. It was created to go after the smugglers and traffickers who get the migrants into the water in the first place. And that is what has been a failure.

Only about 100 people have been arrested and handed over to the Italian authorities.

There is a consensus that what is holding back the operation is that European vessels cannot cross into Libyan waters.

And that, says Ciot, appears to be making Libya very attractive to smugglers.

“Today there are smugglers who put [migrant] boats in the water with just enough petrol to get out of Libyan waters, and they consider it is up to the military and civilian vessels outside the zone to pick them up,” he argues.

The United Nations says that already in 2017, about 230 people have died in the Mediterranean on their way to Europe. More than 4,500 died last year.

“People are continuing to die, regardless of our efforts in international waters,” said Federica Mogherini, the EU’s foreign affairs chief, speaking this week at a graduation programme for 89 members of the Libyan coast guard who went through a training scheme with the EU.

“We do not operate in international waters. So what we are trying to do is strengthening Libyan capacities,” Mogherini explained.

The Sophia operation is due to continue through July. France, despite the misgivings, expressed in this report, is not pulling out.