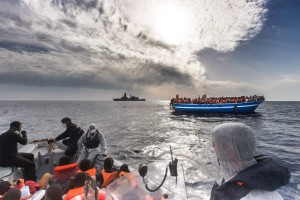 European Commission President Jean-Claude Juncker’s pitch for the mandatory relocation of asylum-seekers continues to face fierce resistance from EU countries, but a consensus is forming on a military operation to crack down on smugglers.

“If everything goes well, we could launch the operation on June 22 at the Foreign Affairs Council in Luxembourg,” says an EU diplomatic source involved in the talks.

Another diplomatic source from one of the Eastern European countries resisting the refugee relocation confirms the desire to move forward with military action to interdict smugglers. “There is a strong pessimism on the rest of the [Migration] Agenda,” the source said, “but there is a determination to launch the naval operation.”

EU ministers agreed last month to launch the mission against smugglers, as part of a response to a rash of tragic incidents in the Mediterranean, including one in which more than 800 migrants from Libya perished at sea trying to reach Europe.

The planned mission, called Eunavfor Med, would be divided into four stages. The first phase, as stated in the EU document approved on May 18, supports “the detection and monitoring of migration networks through information gathering and patrolling on the high seas in accordance with international law.” It would take place only in international waters, and so does not require UN approval.

While several weeks ago the fate of the naval mission was foggy, member states are now moving toward final agreement to launch at least the initial steps.

However, the second phase, which includes “boarding, search, seizure and diversion” of vessels in the Libyan waters, would require the backing of the UN Security Council. The UK, France, Spain and Lithuania are currently drafting a UN resolution in New York.

One obstacle to UN support, agreement from Russia, appears to be slipping away. One diplomat involved in the negotiations told POLITICO that the Russians are “broadly supportive but have questions about the details.”

Another more difficult obstacle for UN support is the tense political situation in Libya.

The North African country, from which the majority of migrants and asylum-seekers cross the sea to arrive in Europe, is torn apart between two capitals, Tripoli in the west and Tobruk in the east.

The UN envoy to Libya, Bernardino León, has been trying for months to reach an accord between the two capitals, but after drafting four different deals, he has failed to conclude an agreement.

León set a deadline to reach a deal by the beginning of Ramadan, which will start at the end of this week. It seems less and less likely that he will succeed.

“There is a strong pessimism on the success of the talks,” says Karim Mezram, a Libya expert at Washington-based Atlantic Council. “And even if he did, the problem would be how to turn the deal quickly into practice since, for example, the Libyans would have to set up a 120-people assembly.”

León “is now trying his last attempt, otherwise it is very likely that he will be forced to quit. There is a strong discontent for his work,” argues Arturo Varvelli, a Libya and terrorism expert at the Italian Institute for Political Studies.

Talks between the Libyans and the Europeans take place in Germany. The Libyans consider Berlin more neutral territory than France, which launched the military operation that toppled Colonel Muammar Gaddafi four years ago; and Italy, the former colonial power in the African country.

Meanwhile, the details of the EU naval mission are still in flux.

EU leaders have decided that the Italian admiral Enrico Credendino will lead the mission, with its headquarters based in Rome, but other details are still under discussion.

“We don’t know yet who exactly the admiral will respond to,” says an Italian military source involved in the preparation of the mission.