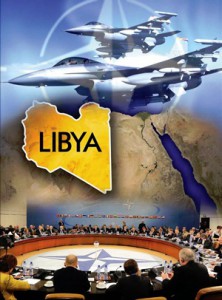 European Union plans for a military campaign to smash the migrant smuggling networks operating in Libya include options for ground forces on Libyan territory, according to the contents of a confidential strategy paper that will be up for discussion by EU ministers tomorrow and on Tuesday.

A joint session of EU foreign and defence ministers is to decide on the mission tomorrow, followed the next day by a meeting of defence chiefs from EU countries. The military package would then need to be approved by heads of government at an EU summit next month.

During Monday’s meeting, Malta, given its proximity to Libya, could very well be proposed to host the operation’s “headquarters and command and control of the proposed mission”, which, according to the paper, ministers is set to identify on Monday.

Italy, however, is expected to take command of the operation and as such, it could also be expected to play host to the headquarters.

And since the operation will not, at least not primarily, be a military mission, the possibility of Malta hosting the operation’s headquarters is not too far-fetched since Malta’s constitutional neutrality could be easily circumvented.

While the strategy paper for the mission focuses on an air and naval campaign, it adds that “presence ashore” might be needed so as to destroy smugglers’ assets, a move that EU leaders agreed to during last month’s extraordinary summit on the Mediterranean’s migration crisis.

The 19-page strategy paper for the mission focuses on an air and naval campaign in the Mediterranean waters near Malta and in Libyan territorial waters and is still subject to United Nation’s approval.

The paper adds, however, that ground operations in Libya may also be needed to destroy the smugglers’ vessels and assets, such as fuel dumps.

“A presence ashore might be envisaged if agreement was reached with relevant authorities,” the paper, seen by this newspaper, reads. “The operation would require a broad range of air, maritime and land capabilities. These could include: intelligence, surveillance and reconnaissance; boarding teams; patrol units (air and maritime); amphibious assets; destruction air, land and sea, including special forces units.”

Although Federica Mogherini, the EU’s chief foreign and security policy coordinator, stressed this week that “we are not planning in any possible way a military intervention in Libya”, the strategy paper makes it quite clear that all options in this respect are open.

According to the paper, “land operations in Libya might be needed and are not ruled out” on account of “militia and terrorist threats to the EU forces” in Libya.

“The existence of heavy military armaments (including coastal artillery batteries) and military-capable militias present a robust threat to EU ships and aircraft operating in the vicinity. The terrorist presence in the region also constitutes a security threat. Action taken ashore could be undertaken in a hostile environment,” the paper notes.

Subject to a UN go-ahead, the military operations would focus on actions “inside Libya’s internal and territorial waters and the coast”, and the seizure and destruction of “vessels on the high seas or in international waters in the Mediterranean would also be mandated”.

“The campaign,” the paper warns, “could result in innocent people being killed” since “boarding operations against smugglers in the presence of migrants has a high risk of collateral damage including the loss of life”.

Mogherini, however, is reportedly optimistic about a quick UN Security Council resolution “allowing the use of force against the smugglers”.

But, if such approval is not forthcoming, the EU would still mount a military mission in the Mediterranean outside Libyan territorial waters and airspace, as well as “action along the coast, in harbour or at anchor [against] smugglers’ assets and vessels before their use”.

Mogherini was in New York this week lobbying the UN Security Council for support and for an authorising resolution on the use of force.  The resolution is being drafted by British diplomats in New York.

Mogherini also went to China last week and was assured that China will not veto the plans in the Security Council. Russia is the biggest problem: it is willing to cooperate but it may object to some of the more robust language.

With France also on board, the operation would only require US backing at Security Council level.

Up to 10 EU countries have so far volunteered to take part in the campaign, senior officials said, including Italy, which would command it, plus Britain, France and Spain.

“EU forces would also have to contend with Libya’s many militias, most of which are broadly aligned under two rival governments. Both governments have rejected the prospect of foreign intervention on Libyan soil to combat smuggling,” the paper reads.

It adds, “The operation will need to be phased in and will be heavily dependent on intelligence. The mission is therefore defined to be “to provide surveillance, intelligence gathering and sharing, and assessment of smuggling activity towards and through the southern central Mediterranean area, and to stop, board, search and dispose of, possibly through their destruction, trafficking vessels and assets before use and thereby contribute to EU efforts to disrupt the business model of trafficking networks”.

The illicit migrant trade across the Mediterranean is now worth up to $323 million a year in Libya alone and its resources are being funnelled into terrorist groups including the Islamic State group, according to a report on Tuesday by the Global Initiative Against Transnational Organised Crime, a network of law enforcement and development groups, and the Rhipto analysis centre in Norway.

Despite this booming trade, the EU’s plan has proved controversial, with both Russia and Libya expressing concerns about the plan.

With a UN resolution in hand, the EU ministers could give formal approval for the operation to go ahead and it would probably be announced by EU leaders at a Brussels summit in late June.