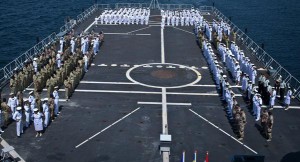 The EU is preparing for a military conflict with Isis as part of a year-long campaign on the north African coast to tackle the Mediterranean migrant crisis, according to secret documents allegedly leaked to the WikiLeaks organisation.

In a draft outline of the plan for military intervention in Libya reportedly approved by representatives from all 28 member states on 18 May, officials expressed a number of major concerns about the operation.

One document, produced by the European Union Military Committee (EUMC), warned that while it could offer a “military end state” in the region: “The EUMC considers that the political end state is not clearly defined.”

WikiLeaks claimed the EUMC also warned about risks to the EU’s reputation in the event of “collateral damage… or creating a perception of having chosen sides [in the Libyan conflict]”.

The alleged document suggested an operation of one year, with an ultimate goal that “the flow of migrants and smugglers’ activities have been significantly reduced”. It recommends using “the full range of surveillance and intelligence capabilities available to member states” to identify potential smuggling vessels before they leave African shores.

And in a section on “operational risk”, defence chiefs noted that: “The EUMC considers that the threat to the force should be acknowledged, especially during activities such as boarding and when operating on land or in proximity to an unsecured coastline, or during interaction with non-seaworthy vessels.

“The potential presence of hostile forces, extremists or terrorists such as Da’esh [Isis] should also be taken into consideration.”

Meanwhile, the head of the International Organisation for Migration has warned that the EU’s scheme to resettle 20,000 people will be insufficient to deal with the crisis.

IOM Director General William Lacy Swing told EU officials that “the 20,000 quota is commendable. We’re glad for it,” but that Europe “needs to go much, much further”.

More than 80,000 migrants have reached European shores so far this year. The IOM estimates that 1,820 migrants have died or gone missing on the Mediterranean Sea route.