You are here: Home / Europe / EU high representative for foreign affairs and security policy “The Iran agreement is a disaster for Islamic State” 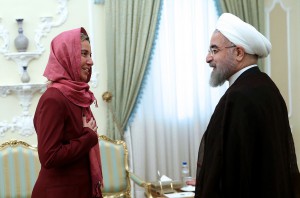 The deal finally reached in Vienna on Iran’s nuclear programme will be a major blow to the terrorists’ clash of civilisations’ narrative, according to Federica Mogherini is EU high representative for foreign affairs and security policy.

In an opinion-editorial published by The Guardian, Mogherini, who negotiated on behalf of the EU in Vienna, writes: “After decades of tensions and distrust, 12 years of hope and fear and 22 months of intense, difficult, highly technical and political negotiations, we had finally made it. Will this turn a page in Iran’s relations with the rest of the world? Commentators are divided and the debate is still heated. I understand the reasons behind the scepticism. But I believe a new chapter really is about to be opened.

As regards the spread of Islamic State, Mogherini explains that there is nothing more worrisome to this militant group than cooperation between the West and the Muslim world.

“But this is not just about [Islamic State]. The whole Middle East is in turmoil. Sectarianism is on the rise. We need to restart political processes to end wars. We need to get all regional powers back to the negotiating table and stop the carnage. Cooperation between Iran, its neighbours and the whole international community could open unprecedented possibilities of peace for the region, starting from Syria, Yemen and Iraq.”

As regards Iran and the new nuclear deal, Mogherini admits that change will not happen overnight. “It will take time. It will take strong political will, vision and a lot of hard work. It will take courage, and even audacity – the very same ingredients required to reach a deal. It worked. We should be confident that the same strong determination can build a different regional framework, one based on cooperation rather than confrontation.”

According to Mogherini, the talks were tough because they wanted a strong commitment – one that could stand up to scrutiny everywhere, and through time.

“I witnessed first-hand the commitment of the Iranian negotiators, under the leadership of foreign minister Mohammad Javad Zarif, and the commitment of all six world powers. There was much speculation about some of the meetings in Vienna being ‘heated’. You would not expect anything less when the issues are so relevant. Still, we all wanted the talks to be based on mutual respect and clarity. And they truly were.”

According to Mogherini, the objective of the negotiations was to address and resolve concerns about Iran’s nuclear programme and to agree on verifiable long-term guarantees about the exclusively peaceful nature of Iran’s nuclear programme. Iran’s aspiration to a civilian nuclear programme is fully recognised, with the assurance that “under no circumstances” will the country seek to acquire the bomb. The lifting of all sanctions will go hand in hand with the implementation of nuclear-related measures by Iran.

“It is a deal made to withstand the challenge of time; a good deal, with no space for interpretations or doubts. A deal that, while implemented, will allow us to build trust and lay the foundations for a new relationship,” writes Mogherini, who is now tasked with coordinating the joint commission on the agreement’s implementation.