You are here: Home / Mediterranean / EU fears ISIS leaders may move to Libya

EU’s counter-terrorism coordinator says losses in Syria, Iraq may force some IS leaders to move to Libya. 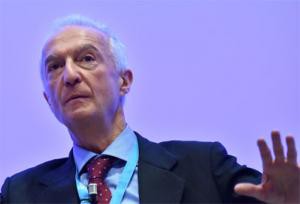 Islamic State military losses in Syria and Iraq may prompt some of its leaders to relocate to Libya where they will face less pressure, the EU’s counter-terrorism coordinator said.

In an interview with AFP, Gilles de Kerchove also warned that the air raids by US-led coalition and Russian warplanes as well as operations by Iraqi and Syrian ground troops could lead IS to stage more Paris-style attacks in Europe.

De Kerchove cited the IS group’s ouster from the Iraqi city of Ramadi and heavy air strikes in Syria where he said the organisation is now on the defensive.

There could be “some movement of senior leadership from the caliphate to Libya,” he said, referring to Raqa as the capital of the so-called caliphate declared in 2014.

He added it was a personal opinion that has not been contradicted by Western intelligence chiefs he meets.

De Kerchove said that given the risk Western powers need to work on counter-terrorism with a Libyan government of national unity that was formed Tuesday under a UN-brokered deal aimed at ending years of bloodshed.

It would be easy at present for the IS group to operate in Libya, where there are an estimated 3,000 IS fighters, “because there are no air strikes for the time being in Libya and not a fully functioning government,” he said.

He added that the military defeats suffered by IS have already prompted the group to inspire or launch attacks in Beirut, Ankara, Istanbul, Tunis, Egypt’s Sinai desert, and Paris, where 130 people were slaughtered on November 13.

“The more there is pressure on Daesh, the more the organisation will first decide to mount attacks in the West, in particular Europe, to show successes,” he said, using the Arabic acronym for IS.

De Kerchove added: “More boots on the ground will be needed to get rid of them in Raqa and Mosul (Iraq) but I think the (US-led) coalition has had successes.”