Libyan has requested the EU provide an extensive list of equipment and boats for its coast guard to stop migrants. The EU is concerned over a wave of migrants using chaotic Libya as a springboard to reach Europe, like reported by dw.com 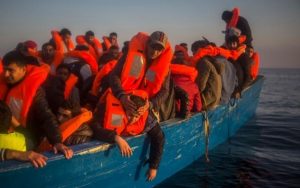 EU defense ministers are meeting in Malta for a second day on Thursday, seeking ways to boost security and defense cooperation.

On top of the agenda is Libya, a hub for migrants from Africa trying to reach Europe.

The UN-backed Libyan government has requested the EU provide equipment, including 130 boats of various types for its navy and coast guard, according to EU diplomatic sources. EU defense ministers and the European Commission are currently evaluating the request.

The EU launched Operation Sophia in 2015 to crack down on human smugglers and stem a tide of migrants using the lawless and war-torn land as a springboard to reach Europe. But the EU naval operation is limited to patrolling in international waters.

The EU has therefore sought to build up Libya’s coastguard and navy. So far 93 Libyan sailors have completed EU training, including three crews for patrol boats. Another 40 sailors have been receiving training in Crete and Malta since January.

Protection of Libya’s coast has been hampered by the existence of Islamist militias and warlords challenging the internationally recognized government in the wake of the West’s military intervention ousting Muammar Gaddafi in 2011.

Chaos in the country and questions over how equipment will be used has raised doubts over handing military hardware to the government.

According to the EU border agency Frontex, so far this year some 28,000 migrants leaving Libya have been intercepted at sea and taken to Italy, 30 percent more than the same period last year.

After closing off the Balkan route to migrants and slowing crossings from Turkey to Greece last year, European governments are increasingly concerned about a new wave of migrants crossing the Mediterranean from Libya with the onset of better summer weather.

Migrants from sub-Saharan Africa fleeing war and poverty have created an opportunity for smugglers, who calculate migrants will be picked up by rescue boats after entering international waters 12 nautical miles off Libya’s coast. In many cases, the rescue calls come directly from unseaworthy boats.