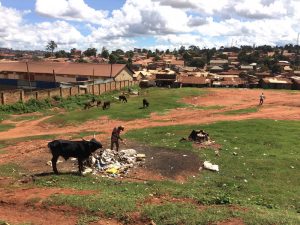 A mosque’s call to prayer echoes above the narrow alleyways of Bwaise, a 90,000-person slum in the outskirts of Uganda’s capital city, Kampala, like reported by euobserver.com.

Here, al-Shabaab, a Somalia-based radical Islamic terror group, had already found easy recruits among its disenfranchised youth in 2010, when over 70 people were killed and scores injured following twin suicide bombings in the capital.

While the ringleader behind the explosions was convicted only last year, warnings have emerged of al-Shabaab’s long reach into Uganda and Kenya since the attack. An EU led counter-terror project is now hoping to ease the tensions among an idle youth, ripe for radicalisation.

Muhammed Kisira, a resident and self-described slum ambassador told reporters on Tuesday (9 May) that the youth in Bwaise remain vulnerable to violent extremism.

“They are on the edge. They are isolated and that is an opportunity for them to become radicalised,” he said.

The sprawl of dwellings extends along the Kampala-Gulu highway and sits on low ground. The rain brings floods and, with it, water borne diseases.

Standing pools of water and corrugated huts sinking into the mud, choked with plastic, are among the many problems these residents face.

Only the small children and infants playing amid the open sewage appear oblivious to the surrounding scenes of desperation. The intermittent smell of burnt rubber and urine stings the nostrils.

For the few who can afford it, pumps built by Coca Cola provide essential clean water. But most still make do by scooping free water from shallow wells. Outbreaks of malaria and typhoid are not uncommon.

The future for the vast majority is bleak. Some late pre-teen girls are forced into prostitution by their own parents, says resident Nyombi Jaffar.

“Sex trade is like free here when you are talking about a dollar,” he tells EUobserver.

Despite the issues, Bwaise is said to be marginally better than slums found in other African capitals, such as Nairobi in Kenya, and Kinshasa in the Democratic Republic of the Congo.

Jaffar says the negative perceptions of drug abuse, sex trade, and floods that affect the slum are slowly changing for the better.

Both Jaffar and Kisira work for the Action for Fundamental Change and Development (AFFCAD), a Kampala-based NGO.

The NGO along with the International Organisation for Migration (IOM) are helping to provide vocational skills to some 200 young people, in an effort to lure them away from possible extremist tendencies.

Kisira had launched the community building scheme years ago by giving tourists slum walks. He managed to finance a small school, but is being told to vacate the premises to open a bigger and better-equipped facility nearby.

He needs money to do it. But an absent state and a heavy-handed police force only make matters more difficult.

“In those slums, the police are seen as villains coming either to arrest or to extract bribes, not to fight crime,” the EU’s ambassador to Uganda, Kristian Schmidt, told reporters earlier that same day.

The EU is providing over €4 million to finance the project and others like it up until 2020. The pot of money is part of a renewed effort to tackle violent extremism in slums surrounding the city.

“Our project is first to rebuild the trust between the police and the local community and create hope,” said Schmidt.

It is not clear if the police are receptive. But Johnathan, a 20 year old who is being taught photography, says the six month training course is giving him a renewed perspective.

“The very factors that surround you, hinder you,” he says of the slum.

“If we are given some opportunities, then we have a hope for the future, then we can have a dream.”