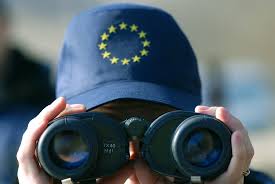 The EU is preparing to send peace monitors to Libya if a new ceasefire deal holds, according to a document seen by the Reuters news agency.

The options paper, drafted by the EU foreign service and discussed by EU diplomats on Tuesday (20 October), says that if Libya creates a unity government, EU states would consider a civilian or military mission to work on “demobilisation, disarmament, and reintegration” of local militias.

It says the mission “would be of modest scale and limited to [provide] support to a mediation unit, provision of aerial monitoring, and possibly the provision of civilian monitors”.

It says EU military assets could, in the “medium to longer term”, be deployed to protect Libyan oil facilities and government buildings.

It says the EU could also redeploy Eubam Libya – a civilian operation to help the country train and equip its border guard services.

The border mission was launched in 2013 but was mothballed in mid-2014 due to the security situation in Libya.

The EU document adds that the bloc is ready to deploy its naval anti-smuggler mission, Operation Sophia, in Libyan waters; to blacklist Libyan chiefs who spoil the peace process; and to immediately disburse €100 million in assistance to a new unity government.

Libya has split into at least two de facto states since the fall of Muammar Gaddafi in 2011, with rival governments in Tripoli and in Tobruk.

It has also seen the emergence of local warlords who, according to EU sources, work with smuggler gangs to put refugees on boats to Europe.

Hopes of a breakthrough were raised earlier this month when Bernardino Leon, a UN envoy, proposed a new political accord.

Under the deal, the Tobruk authorities would put forward a PM to lead a national unity government, but with three deputy PMs, including leaders from rival factions.

The temporary structure would then draft a new constitution and organise “inclusive” parliamentary elections.

The EU foreign service, in a statement on Monday, endorsed the model.

It said “the parties to the dialogue face a stark choice. They can delay approval of the text and … put at risk the stability of the country”, or they can “immediately approve the hard fought political compromise” and help Libyan people live in peace.

The statement, endorsed also by Algeria, Morocco, Qatar, Tunisia, Turkey, the United Arab Emirates, and the US, adds: “The international community looks forward to working with the Government of National Accord, at their request, in supporting the fight against terrorism, particularly ISIL and Ansar Al-Sharia [two radical Islamist groups operating in Libya]”.

The Tobruk-based authorities on Tuesday rejected the UN blueprint.

Saleh Ghalma, a senior Tobruk MP, said the new PM should have fewer deputies. Faraj Hashem, a Tobruk spokesman, said the blueprint is an “arbitrary decision”.

But the Tobruk statements also “called for the peace dialogue to be continued”, amid EU hopes to overcome opposition from hardliners.