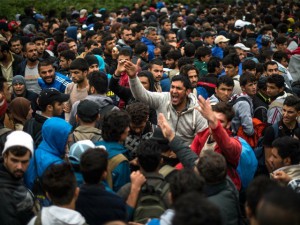 The number of Syrian migrants is falling, while the number of Afghans, Iraqis and West Africans continues to grow, according to the European Union’s (EU) Frontex agency.

The organisation, which is tasked with monitoring and controlling movements around Europe’s borders, has revealed that the new wave of migrants aren’t necessarily fleeing conflict, but rather “aspiring” for a better economic situation, according to two agency reports.

The first document talks about migration coming through the Greek islands from the Middle East. They state that in recent months the percentage of Syrian migrants is decreasing.

According to the agency, although Syrians represented 56 percent of the illegal migrants that crossed into Greece in 2015, by December that number had fell to 39 percent.

Frontex Executive Director claimed that one reason for this was a better detection of migrants travelling with false Syrian documents saying, “With an increased presence of Frontex and additional Greek officers, we’re seeing improved screening of migrants, which means that the number of people who were able to claim false nationality has been reduced.”

The report also said that Iraqis and Afghanis as a percentage of the migrants had dramatically increased with the share of Iraqis more than doubling from 11 percent in October to 25 percent by the end of December. Afghani numbers also have increased to one third of migrants crossing into Greece.

The second report released was a 52-page comprehensive look into migration from West Africa through into Italy. The detailed paper tells of the methods West Africans use to reach Libya and then Italy. Many start their trip in Niger which has become a hub for smuggling people, drugs and firearms into Europe – as noted by Breitbart London last October.

The motivation for the migration is also discussed.

The report says, “For many West Africans, the decision to migrate is motivated by the feeling of inequality as well as social, peer and  family  pressure rather than by desperate need (poverty). This is why many of the migrants are not the worst-off in their home countries.”

It is also said that relatives in Europe encourage illegal migration and that West Africans who make the trip and return achieve social status.

The report says, “many in Niger and West Africa view migration to Europe also as a ‘cultural’ phenomenon. Some would-be migrants are driven by the fame and status migrants gain after they are able to buy a house or a car upon return from Europe. These perceptions of how easy it is to get rich in Europe are strong.”

While the African migration report covers the first half of 2015 it shows a considerable trend in growth from year to year as more and more migrants travel from West Africa to Libya.

German government officials expect the number of African migrants to continue to grow as the population of West Africa is set to skyrocket to 40 percent of the world’s population by 2050 according to UNICEF.