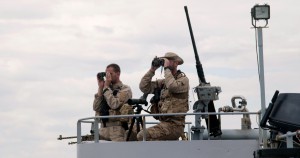 EU member states approved on Monday plans to take military action against people smugglers in the Mediterranean, seizing and destroying boats to break up networks operating out of Libya, sources told AFP.

The EU launched a first, intelligence gathering phase of its EU NavFor Med operation in July but now it will be allowed to stop and if necessary destroy boats which have carried thousands of migrants risking their lives to get to Europe.