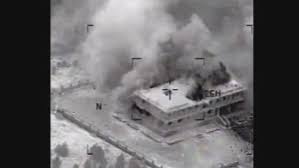 The European Union’s counter-terrorism coordinator believes the Islamic State group is resorting to attacks abroad because it is hurting from coalition airstrikes.

Apart from the Nov. 13 massacres in Paris, the group has also launched attacks in Turkey, Lebanon and Egypt’s Sinai in recent weeks and De Kerchove says that it appears to be changing strategy.

Gilles De Kerchove told EU lawmakers on Tuesday that “the pressure of the coalition airstrikes … in Raqqa and around Raqqa maybe forced them to seek successes abroad.”

He said: “Is this a sign of weakness? I believe so.”

The city of Raqqa in northern Syria is the group’s headquarters and a focus of an air campaign by Russia and a U.S.-led coalition including France.