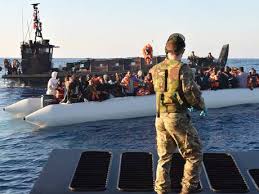 The EU’s military operation to tackle migrant trafficking in the Mediterranean Sea enters its second phase on Wednesday. Warships will start patrolling international waters to protect migrants and catch smugglers.

Six ships already in place in international waters off the coast of Libya – the departure point for many of the migrant boats – will be able to search and seize suspicious vessels as the second phase of the EU’s “Sophia” mission – formerly known as EUNAVFOR Med – begins.

They include an Italian aircraft carrier, a French frigate and one British, one Spanish and two German ships. At least three other vessels supplied by the Belgian, British and Slovenian navies are expected to arrive at the end of October to complete the force, which also includes four aircraft and 1,318 personnel.

During the first phase of the mission, operational since the end of July, traffickers were not actively targeted, but over 2,100 people have been saved from drowning. The first phase also saw staff compile and analyze information on the trafficker networks.

Sophia is allowed to operate in international waters, but will need a green light from the United Nations Security Council and Libyan authorities to venture into Libyan waters, which is by no means guaranteed. If granted, however, it would launch the third phase of Sophia – targeting traffickers in Libyan waters.

The operation’s name was changed in honor of a young girl born on a German rescue ship off the coast of Libya this summer.

The UN estimates that more than 520,000 migrants and refugees have crossed the Mediterranean this year, sparking Europe’s biggest refugee crisis in decades.