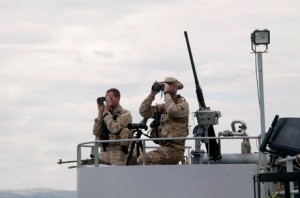 Europe’s military operation to seize and destroy boats used by migrant smugglers in the Mediterranean will not work unless it has access to Libyan territory, its deputy commander said Tuesday.

For the past three weeks, Operation Sophia has been operating in international waters, charged with arresting smugglers and seizing their vessels as Europe tries to stem the flow of migrants making the perilous sea crossing.

But it has so far not seized any vessels or made any arrests, and its number two Rear Admiral Herve Blejean said that until the operation takes to Libyan waters — which it is currently not allowed to do — it will have little impact.

“The operation will only be effective when we can work close to the (smuggler) networks, go after the big fish not the little ones who go out to sea,” Blejean said at a press conference in Rome.

“So at some point, it will have to work within Libyan territory,” he said, referring to the need to tackle those running smuggler networks rather than those lower down the chain who accompany the migrants on their crossing.

Blejean, a former commander of the EU’s counter-piracy Operation Atalanta, said tackling pirates off Somalia had been possible “without really changing anything in Somalia itself”.

But “there is no way we can do the same in the operation now”, he warned.

While Sophia can help prevent deaths at sea, blocking the departure of vulnerable migrants in Libya — estimated to be between 500,000 and one million people — will leave them trapped and “create a situation worse than we expected”.

“In certain coastal zones, we estimate 50 percent of revenue comes from illegal migration,” Blejean said, adding that any intervention against smuggling would have to envisage an economic plan to reboot those areas.

Any intervention in Libya would require a UN Security Council endorsement and the green light from the Libyan government — neither of which appear forthcoming.