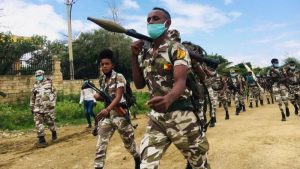 Forces of Ethiopia’s Tigray People’s Liberation Front (TPLF) have destroyed an airport in the town of Axum, state-affiliated Fana broadcaster said on Monday, after federal troops gave them a three-day deadline to surrender, like reported by cgtn.com.

TPLF leader Debretsion Gebremichael said the government ultimatum was a cover for its defeats on three fronts.

Ethiopian Prime Minister Abiy Ahmed on Sunday gave Tigrayan regional forces 72 hours to surrender before the military began an offensive on the regional capital of Mekelle.

“We urge you to surrender peacefully within 72 hours, recognizing that you are at the point of no return,” Abiy said in a message posted on Twitter on Sunday evening.

Earlier, a military spokesman had said that advancing Ethiopian troops planned to surround Mekelle with tanks and may shell the city to force surrender.

The UN has urged the Ethiopian government to ensure the protection of civilians, as the war has sent more than 35,000 refugees into neighboring Sudan.

A few kilometers from Sudan’s Lugdi border checkpoint, refugees have been placed in temporary shelter in the township of Village Eight, a town that had 3,000 empty housing units but is now holding 15,000 people from the Tigray area.

The UN Population Fund has been providing aid to the fleeing Ethiopians there, but refugees said they were not getting enough of the aid they needed.

Local communities and humanitarians in Sudan have also been struggling to feed and accommodate the growing number of refugees, many of them children.

Catherine Sozi, the UN humanitarian coordinator for Ethiopia, said on Monday she hoped for the guarantee of safety and security of aid workers and the “protection of more than 525,000 civilian (non-combatants) who live in Mekelle”. She also asked for the protection of all civilian infrastructures, like schools and health facilities.

In a statement on Twitter, the Ethiopian government’s emergency task force said: “Our women and men in uniform have shown great care to protect civilians from harm during the law enforcement operation they have carried out in Tigray so far.”