You are here: Home / Africa / Ethiopia: Tigrayan Forces are advancing on Addis Ababa 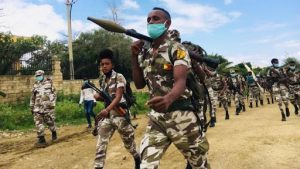 Ethiopia Thursday marks the one-year anniversary of brutal fighting between government forces and regional Amhara militiamen aligned with Eritrean forces against rebels in the northern Tigray region. Now, Tigrayan forces say they are advancing on the capital, Addis Ababa, and that it could fall within months or even weeks.

In recent weeks, the Tigrayan forces and the Oromo regional forces have joined in the fight against the central government and claimed to make significant advances.

“Ethiopia will not collapse. Ethiopia will prosper,” Abiy said speaking in Addis Ababa on Wednesday. “Ethiopia will forever exist with her honor by defeating all who test her through the blood and bones of her children.”

The Ethiopian government declared a six-month state of emergency Wednesday and called on residents to defend their neighborhoods if rebels arrive in the capital. “Our country is facing a grave danger to its existence, sovereignty and unity. And we can’t dispel this danger through the usual law enforcement systems and procedures,” said Justice Minister Gedion Timothewos during a state media briefing.

Debretsion Gebremichael, the president of the Tigray region blamed the Ethiopian government and its allies for causing the suffering in the past year. “The warmongers decided to continue with the war, and we entered into this war because the only option we had is to destroy our enemies by force.”

State Department spokesperson Ned Price called on all the warring parties to end the fighting and protect the lives and rights of citizens. He said the State Department has now updated the travel advisory for Ethiopia to Level 4.

“What that means is we are advising U.S. citizens, do not to travel to Ethiopia,” Price said. “We are recommending that U.S. citizens in Ethiopia consider departing now using commercial options that remain available.”

“We have reasonable grounds to believe that during this period, all parties to the Tigray conflict have committed violations of international human rights, humanitarian and refugee law,” The U.N. human rights chief said during a press briefing on Wednesday. “Some of this may amount to war crimes and crimes against humanity. Civilians in Tigray have been subjected to brutal violence and suffering.”

A joint report by the U.N. human rights office and the government-created Ethiopian Human Rights Commission found that sexual violence has been rampant in the conflict, detailing reports of gang rapes by various parties against women and girls, but also against men and boys.

The yearlong conflict has plunged about 400,000 people in the Tigray region into famine, killed thousands of civilians and forced more than 2.5 million people in the north to flee their homes, according to the U.N.