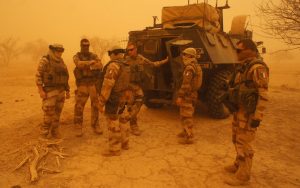 The Estonian government on Thursday approved sending a unit of up to 50 active service military personnel to participate in the French-led anti-terrorist Operation Barkhane in Mali, like reported by news.err.ee.

Specifically, the government decided to seek a mandate from the Riigikogu for the deployment of up to 50 active service personnel on a year-long mission to Mali, government spokespeople said.

The Estonian contingent would be tasked with ensuring the security of the base and its close environs. Estonia is planning to deploy an infantry unit with armored personnel carriers and a support element, which would operate out of the Gao field base in Mali.

Prime Minister Jüri Ratas (Center) said in a press release on Thursday that the country’s decision to contribute to the anti-terrorist operation is yet another example of very good cooperation between Estonia and France.

“France was the second ally alongside Britain to deploy its unit to the NATO battle group stationed in Estonia last spring, and a French unit will return to the battle group next year,” Ratas pointed out. “Governments do not make decisions on sending troops lightly. That France and Estonia have found possibilities to engage in defense cooperation providing practical value-added on repeated occasions in recent years is definitely a sign of very close relations between the two countries.”

Minister of Defence Jüri Luik (IRL) noted that with its support of an operation led by an important ally, Estonia would demonstrate that it is not only a consumer of security, but also a contributor.

“By participating in an operation aimed at creating stability on the southern flank of NATO and the European Union, we support our strong ally in Europe,” Luik said. “We also cement the image of Estonia as a country that is ready to contribute to ensuring security namely in places where great security threats to Europe originate.”

France’s Minister of Defence in January proposed to Estonia that the latter participate in France’s largest international mission. Mali has also already officially agreed to the presence of Estonian units within its territory.

Launched in 2014, Operation Barkhane is a French-led operation in the Sahel region of Africa aimed at creating stability and controlling problems which Europe is facing from that region, such as terrorism and illegal migration. The operation, which involves some 3,000 French troops, is headquartered in N’Djamena, the capital and largest city of Chad. The operation encompasses Burkina Faso, Mali, Mauritania, Niger and Chad.

Estonia was one of the first partner nations invited by France to participate in Operation Barkhane. The U.K. is also to join the operation.

In 2014, a 50-strong Estonian infantry platoon took part in an EU stabilization mission in the Central African Republic mainly manned by France.

Last year, a French armored unit of 300 personnel armed with infantry fighting vehicles and tanks spent a rotation at Tapa, Estonia as part of the NATO battle group stationed there. France has announced that it will send a similar unit here in 2019.