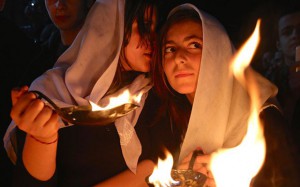 In the moments before he raped the 12-year-old girl, the Islamic State in Iraq and the Levant fighter took the time to explain that what he was about to do was not a sin. Because the girl practiced a religion other than Islam, the Qur’an not only gave him the right to rape her — it condoned and encouraged it, he insisted.

He bound her hands and gagged her. Then he knelt beside the bed and prostrated himself in prayer before getting on top of her.
When it was over, he knelt to pray again, bookending the rape with acts of religious devotion.
“I kept telling him it hurts — please stop,” said the girl. “He told me that according to Islam he is allowed to rape an unbeliever. He said that by raping me, he is drawing closer to God,” she said in an interview alongside her family in a refugee camp, to which she escaped after 11 months of captivity.
The systematic rape of women and girls from the Yazidi religious minority has become deeply enmeshed in the organization and the radical theology of ISIL in the year since the group announced it was reviving slavery as an institution. Interviews with 21 women and girls who recently escaped, as well as an examination of the group’s official communications, illuminate how the practice has been enshrined in the group’s core tenets.
The trade in Yazidi women and girls has created a persistent infrastructure, with a network of warehouses where the victims are held, viewing rooms where they are inspected and marketed, and a dedicated fleet of buses used to transport them.

A total of 5,270 Yazidis were abducted last year, and at least 3,144 are still being held, according to community leaders. To handle them, ISIL has developed a detailed bureaucracy of sex slavery, including sales contracts notarized by the ISIL-run Islamic courts. And the practice has become an established recruiting tool to lure men from deeply conservative Muslim societies, where casual sex is taboo and dating is forbidden.

A growing body of internal policy memos and theological discussions has established guidelines for slavery, including a lengthy how-to manual issued by ISIL’s Research and Fatwa Department just last month. Repeatedly, ISIL leadership has emphasized a narrow and selective reading of the Qur’an and other religious rulings to not only justify violence, but also to elevate and celebrate each sexual assault as spiritually beneficial, even virtuous.
“Every time that he came to rape me, he would pray,” said F, a 15-year-old girl who was captured on the shoulder of Mount Sinjar one year ago and was sold to an Iraqi fighter in his 20s. Like some others interviewed, she wanted to be identified only by her first initial because of the shame associated with rape.
“He kept telling me this is ibadah,” she said, using a term from Islamic scripture meaning worship. “He said that raping me is his prayer to God. I said to him, ‘What you’re doing to me is wrong, and it will not bring you closer to God.’ And he said, ‘No, it’s allowed. It’s halal,’ ” said the teenager, who escaped in April with the help of smugglers after being enslaved for nearly nine months.

ISIL’s formal introduction of systematic sexual slavery dates to Aug. 3, 2014, when its fighters invaded the villages on the southern flank of Mount Sinjar in northern Iraq. Its valleys and ravines are home to the Yazidis, a religious minority who represent less than 1.5 percent of Iraq’s estimated population of 34 million.

The offensive came just two months after the fall of Mosul, the second-largest city in Iraq. At first, it appeared that the subsequent advance on the mountain was just another attempt to extend the territory controlled by ISIL fighters.

Almost immediately, there were signs that their aim this time was different. Survivors say that men and women were separated within the first hour of their capture. In village after village, the men and older boys were driven or marched to nearby fields, where they were forced to lie down in the dirt and sprayed with automatic fire.

The women, girls and children, however, were hauled off in open-bed trucks.

“The offensive on the mountain was as much a sexual conquest as it was for territorial gain,” said Matthew Barber, a University of Chicago expert on the Yazidi minority. He was in Dohuk, near Mount Sinjar, when the onslaught began last summer and helped create a foundation that provides psychological support for the escapees, who number more than 2,000, community activists said.

F says her family of nine was trying to escape, speeding up mountain switchbacks, when their aging Opel overheated. She, her mother and her sisters — 14, 7 and 4 years old — were helplessly standing by their stalled car when a convoy of heavily armed ISIL fighters encircled them.

“Right away, the fighters separated the men from the women,” she said. She, her mother and sisters were first taken in trucks to the nearest town on Mount Sinjar. “There, they separated me from my mom. The young, unmarried girls were forced to get into buses.”

F’s account is echoed by a dozen other female victims interviewed for this article. They described a similar set of circumstances even though they were kidnapped on different days and in locations miles apart.

F says she was driven to the Iraqi city of Mosul about six hours away, where they herded them into the Galaxy Wedding Hall. And in addition to Mosul, women were herded into elementary schools and municipal buildings in the Iraqi towns of Tal Afar, Solah, Ba’aj and Sinjar City. They would be held in confinement, some for days, some for months. Then, inevitably, they were sent in smaller groups to Syria or to elsewhere in Iraq, where they were bought and sold for sex.

“It was 100 percent preplanned,” said Khider Domle, a Yazidi community activist who maintains a database of the victims. “I spoke by telephone to the first family who arrived at the Directory of Youth in Mosul, and the hall was already prepared for them. They had mattresses, plates and utensils, food and water for hundreds of people.”

Detailed reports by Human Rights Watch and Amnesty International reach the same conclusion about the organized nature of the sex trade.

The girls described how three ISIL fighters walked in, holding a register. They told the girls to stand. Each one was instructed to state her first, middle and last name, her age, her hometown, whether she was married, and if she had children.

For two months, F was held inside the Galaxy hall. “They laughed and jeered at us, saying ‘You are our sabaya.’ I didn’t know what that word meant,” she said. Later on, the local ISIL leader explained it meant slave.

In much the same way as specific Bible passages were used to support the U.S. slave trade, ISIL cites specific verses or stories in the Qur’an or else in the Sunna, the traditions based on the sayings and deeds of the prophet Mohammed, to justify their human trafficking, experts say.

Scholars of Islamic theology disagree, however, on the proper interpretation of these verses, and on the divisive question of whether Islam actually sanctions slavery.

Kecia Ali, an associate professor of religion at Boston University and the author of a book on slavery in early Islam, said, “It wasn’t a particular religious institution. It was just how people did things.”

Cole Bunzel, a scholar of Islamic theology at Prince­ton University, disagrees, pointing to the numerous references to the phrase “Those your right hand possesses” in the Qur’an, which for centuries has been interpreted to mean female slaves. He also points to the corpus of Islamic jurisprudence, which he says includes detailed rules for the treatment of slaves. “There is a great deal of scripture that sanctions slavery,” said Bunzel, the author of a research paper published by the Brookings Institution on ISIL ideology. “You can argue that it is no longer relevant and has fallen into abeyance. [ISIL] would argue that these institutions need to be revived, because that is what the Prophet and his companions did.”