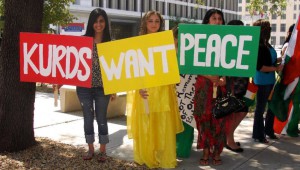 Tensions are increasing in Europe between Turks and Kurds as a result of crackdown on Kurdish media and political parties by the Turkish authorities following the failed coup attempt last summer.

On Thursday, Turkish nationalists attempted to burn down the Kurdish institute in the Belgian capital Brussels.

The attack followed a protest by thousands of Kurds in Brussels who condemned the increasing authoritarian policies in Turkey and the arrests of hundreds of members of the pro-Kurdish Peoples’ Democratic Party (HDP).

A group of Turkish nationalists attempted to burn the Kurdish institute in Brussels, following a call by the Turkish Prime Minister Reccep Tayyip Erdogan on European authorities to ‘be more tough on terrorists’, in a reference to the Kurdish organizations sympathetic to the Kurdistan Workers Party (PKK).

The Kurdish institute saw in the call as an attempt to incite Turkish extremists to violence in Brussels.

“We call on the Belgian authorities to take urgent steps. The police has eyewitness accounts of the attack, we ask them to prosecute these extremists,” Derwich Ferho, the head of the Kurdish institute said in a statement obtained by ARA News.

“Yesterday, it became clear who the real terrorists are,” Ferho said on Friday. “We ask everyone to pay attention to the dramatic situation in Turkey and the importance to demand human rights and people’s rights in Turkey and all of Kurdistan.”