You are here: Home / Europe / Erdogan’s blackmail: “Turkey will no longer stop migrants heading towards Europe” 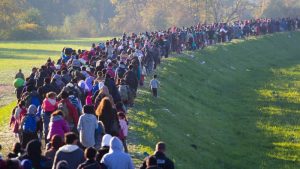 An official said this in anticipation of a massive movement of refugees from the Syrian province of Idlib, where there are one million displaced people.

“Turkish police, coastguard and border security officials had been ordered to stand down on refugees’ land and sea crossings towards Europe,” he told Reuters. A local Syrian governor announced earlier that 29 soldiers had been killed in the attack on the Turkish army in Idlib.

The Syrian Observatory for Human Rights, however, said that 34 soldiers had been killed.

Turkish President Recep Tayyip Erdogan has convened an extraordinary session of the Turkish Security Council in Ankara, which was attended by the defense minister and secret service chiefs. According to Turkish media, the situation in Idlib was discussed.

Turkey has sent thousands of troops to the border of this Syrian province to support rebels against President Bashir al-Assad’s offensive. Show more Show less Nearly one million Syrians have fled in the last three months, in the largest exodus since the war began.

According to the Syrian Observatory, government forces, with the help of the Russian army, have occupied about 60 percent of the area in southern Idlib and neighboring Hami district in the last three days.

Around 300 migrants head from Turkey towards EU borders
The official told Reuters that Turkish police, coastguard and border security officials had been ordered to stand down on refugees’ land and sea crossings towards Europe in anticipation of the imminent arrival of refugees from Idlib.

Demiroren news agency said there were around 300 migrants, including women and children, in the group which began heading towards the borders between the two European Union countries and Turkey’s Edirne province at around midnight, Turkish media reported, after a senior official said Ankara will no longer stop Syrian refugees from reaching Europe.

Syrians, Iranians, Iraqis and Pakistanis were among those in the group.

Reuters could not independently confirm who the people were nor where they were headed.

Turkish President Tayyip Erdogan has repeatedly threatened to open the gates for migrants to travel to Europe. On Thursday, Turkey said 33 Turkish soldiers were killed in an air strike by Syrian government forces in Syria’s northwestern Idlib region on Thursday.

In doing so, they were able to cut through the key M5 highway linking the city of Aleppo in the north with the capital Damascus, just days after the Syrian government opened it, for the first time since 2012.

Turkey and Russia support opposing sides in the Syrian war, with Ankara providing support to the opposition and Moscow to the President Assad, the AP reminded.