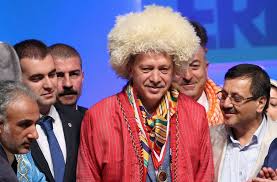 Turkish President Tayyip Erdogan accused Kurdish groups on Saturday of trying to grab control of northern Syria, saying Ankara would not allow this to happen.

In a speech in southeast Turkey, Erdogan also blasted Russia’s President Vladimir Putin for hosting Syrian President Bashar al-Assad earlier this week, in comments that were his most critical yet towards his Russian counterpart.

On northern Syria, Erdogan denounced the merging of the Syrian town of Tel Abyad last week into an autonomous political structure created by the Kurds.

“All they want is to seize northern Syria entirely,” Erdogan said. “We will under no circumstances allow northern Syria to become a victim of their scheming. Because this constitutes a threat for us, and it is not possible for us as Turkey to say ‘yes’ to this threat.”

Tel Abyad, on the border with Turkey, was captured in June from ISIS by Kurdish YPG militia with help from U.S.-led air strikes. Last week, a local leadership council declared it part of the system of autonomous self government established by the Kurds.

Syrian Kurds have established three autonomous zones, or “cantons”, across northern Syria since the civil war broke out in 2011. They deny aiming to establish their own state.

Turkey is alarmed by territorial gains for the Kurds in Syria’s civil war, which it fears could stir separatism among its own Kurdish minority. For the past three decades Ankara has been trying to end an insurgency by fighters of the Kurdistan Workers Party (PKK), which is classified as a terrorist organization by the United States and European Union.

The PKK has been staging almost daily attacks in the southeast since July, when a ceasefire fell apart.

Turkey accuses the Syrian Kurds’ political arm, the PYD, of deep links to the PKK. It has been incensed by the role the Kurds have carved out for themselves, with U.S. support, in the fight against ISIS in northern Syria.

Erdogan also slammed countries who provided assistance to the PYD, although he did not name them, and said it harbored 1,400 PKK members.

Earlier this month, the YPG Kurdish militia announced a new alliance with small groups of Arab fighters, and the group was air-dropped small arms and ammunition by U.S. forces in northeast Syria.

Washington has indicated it could direct funding and weapons to Arab commanders on the ground who cooperate with the YPG.

Erdogan also criticized Putin for hosting Assad in Moscow earlier this week, questioning how he could “welcome on a red carpet someone who has spilled the blood of 370,000 people”.

Assad flew to Moscow on Tuesday evening to thank Putin for his military support, his first foreign visit since the start of the Syrian crisis in 2011.

The surprise trip came three weeks after Russia launched a campaign of air strikes against Islamist militants and rebels in Syria that has bolstered Assad’s forces.