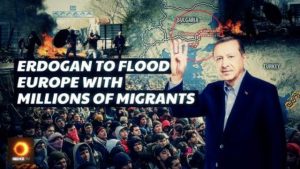 Turkish President Recep Tayyip Erdogan warned on Monday that “millions” of migrants would soon head for Europe, drawing accusations from EU leaders that he is trying to pressure them into backing his incursions into Syria, like reported by france24.com.

Turkey gave the green light to refugees and migrants on Friday to leave for the European Union and thousands have since massed at the Greek border, triggering fears of an influx like that which poisoned European politics in 2015.

But Turkey, which hosts roughly four million refugees, is trying to hold off another mass influx from Syria – where government forces backed by Russian air power are advancing into the last rebel stronghold of Idlib.

Erdogan further ramped up the pressure late on Monday, saying he had turned down an EU offer of one billion euros (£1.1 billion) in extra aid for migrants, adding to a six-billion-euro deal agreed in 2016.

“We don’t want this money,” Erdogan said at a news conference without specifying when the money was offered, or by whom.

His office later added that he had spoken to Merkel over the phone and warned once again that Europe must take a “fair share of the burden” of dealing with migrants.

He claimed the numbers of migrants at the Greek border – who include Afghans, Syrian and Iraqis – were far higher than figures provided by officials and reporters at the scene, saying “hundreds of thousands” were already there.

“There will be more. Soon, this number will be expressed in millions,” he added.

Greece says some 10,000 people were barred from entering the country over the weekend. Clashes broke out as police fired tear gas at the refugees, who responded by lobbing rocks.

A video shared by a Turkish official, which could not be independently verified, showed a boat of migrants being shot at and harassed by Greek coastguards.

Turkey accused Greek police of killing two migrants after a video was shared of a bloodied Syrian on the border, although Athens rejected this as “fake news”.

In desperation, many have sought alternative routes and Greek port police said a young boy died when a makeshift boat capsized off the Greek island of Lesbos.

Athens said it would boost patrols and it suspended asylum applications by those entering illegally – a move denounced by the UN refugee agency as having “no legal basis”.

The emergency at Greece’s border comes as Turkey has launched a military operation in Idlib in northwestern Syria in a bid to push back the regime’s offensive against country’s the last rebel-held bastion.

Close to one million people have been forced to flee the Syrian government’s assault in the biggest wave of displacement of the nine-year conflict, but they are not being allowed to enter Turkey.

Erdogan said he hoped for a ceasefire in Syria when he meets his Russian counterpart Vladimir Putin later this week.