You are here: Home / Europe / Erdogan to Turkish military leadership: sink a Greek ship or shoot down a fighter jet 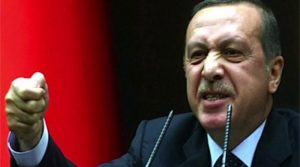 Shocking is the exposé of the German newspaper Die Welt, which presents the Turkish President Recep Tayyip Erdogan asking his generals to provoke a political incident by sinking a Greek ship or shooting down a Greek fighter jet.

“A few days ago, President Erdogan ordered his generals to sink a Greek ship but try not to cause loss of human lives. The generals refused to do so and the next idea was to shoot down a Greek fighter jet. There, again, the idea was for the pilot to get off the plane and save his life.”

In other words, the goal was to cause a hot episode but without human losses. According to Welt, these plans were rejected by the Turkish generals, otherwise we would already have had a heated incident in the southeastern Mediterranean.