You are here: Home / MidEastGulf / Erdoğan to meet Putin to discuss Syria 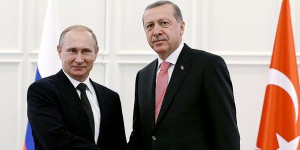 President Recep Tayyip Erdoğan is meeting with Russian President Vladimir Putin in Moscow on Wednesday to discuss bilateral and international relations, particularly the situation in Syria.

During his one-day working visit to Russia, Erdoğan is also expected to attend the opening of a new mosque in Moscow. He will be joined by Palestinian President Mahmoud Abbas for the opening of the Soborny Mosque on Sept. 23.

Russia, one of the supporters of Syrian President Bashar al-Assad’s regime, has recently bolstered its military posture in Syria, extending military assistance to the embattled regime, which has lost large chunks of territory to various opposition groups. According to US officials, Russia recently started flying drones on surveillance missions in Syria. Turkey has pushed for the removal of Assad from power since the beginning of the civil war in Syria. After nearly one year of negotiations, Turkey recently agreed to join the US-led military campaign against the terrorist Islamic State in Iraq and the Levant (ISIL).

Turkish Foreign Minister Feridun Sinirlioğlu met with Russian Foreign Minister Sergey Lavrov in Sochi on Thursday. At a joint press conference after the meeting Lavrov stated that Turkey and Russia hold different opinions regarding the future of Syrian President al-Assad and that incongruent approaches to the crisis are bound to doom any agreement between the two countries.