You are here: Home / Europe / Erdogan threatens to send millions of refugees to EU 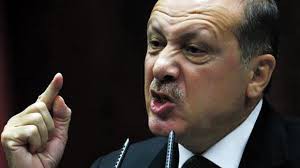 Turkish President Recep Tayyip Erdogan on Thursday threatened to send the millions of refugees in Turkey to European Union member states, as he slammed the bloc’s behaviour in the migrant crisis.

In a speech that stepped up his denunciations of Western policy in the refugee crisis, Erdogan confirmed he had threatened EU leaders at a summit meeting in November that Turkey could say “goodbye” to the refugees.

“We do not have the word ‘idiot’ written on our foreheads. We will be patient but we will do what we have to. Don’t think that the planes and the buses are there for nothing. We will do the necessary,” Erdogan told a business forum in Ankara.

Greek website euro2day.gr had earlier this week reported that at the G20 summit in Antalya in November Erdogan had angrily threatened to EU Commission president Jean Claude Juncker that Turkey could send the refugees to Europe.

The website had quoted Erdogan as telling Juncker: “We can open the doors to Greece and Bulgaria anytime and put the refugees on buses.”

“I am proud of what I said. We have defended the rights of Turkey and the refugees. And we told them (the Europeans): ‘sorry, we will open the doors and say ‘goodbye’ to the migrants’,” Erdogan said in his speech Thursday.

He also lashed out at UN calls on Turkey to take in tens of thousands of Syrian refugees fleeing regime advances in the Aleppo region, saying the United Nations has spent less than half a billion dollars in the crisis.

“Shame on you! Shame on you!” said Erdogan, adding that instead the United Nations could pressure its members to take in more refugees.

“The United Nations should give advice to other countries. And then we can send the refugees to these countries,” he said.

Turkey is already hosting 2.5 million refugees from Syria’s civil war and hundreds of thousands from Iraq and is increasingly bitter it has been left to shoulder the burden.

The European Union has agreed to give Turkey three billion euros in financial aid for the refugees but the funds have yet to be handed to Turkey, two-and-a-half months after they were agreed.

“The three billion euros is not in our budget, where has it gone?” asked Erdogan. “It’s for refugees!”