You are here: Home / West Asia / Erdogan sending mercenaries to Kashmir, paying $2,000 to each fighter 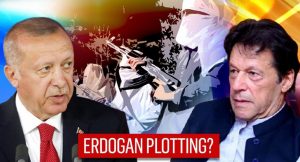 Reports have emerged of Turkey preparing to send its fighters in East Syria to Kashmir. Andreas Mountzouralias, a Greek journalist in his report titled ‘Erdogan sends mercenaries to Kashmir’ on Pentapostagama has detailed the plans of Turkish President Recep Tayyip Erdogan, like reported by indiatoday.in.

According to the report, this is part of Ankara’s attempt to extend its influence to Muslims in South Asia amid President Erdogan’s ongoing steps to challenge Saudi Arabia’s dominance of the Islamic world.

Pakistan was the second country in the plan as Ankara and Islamabad prepare for a permanent presence of surface units and aircraft of the Pakistani Defense Ministry in the Turkish operation ‘Shield of the Mediterranean’, with which Erdogan hopes to plunder Greek lands and plots of land from Greece.

Citing ANF, the Pentapostagama quoted local sources to say that Abu Emsa, who is the head of the brigade of Suleiman Shah, a gang that joined the Syrian National Army (SMO), 5 days ago told its members in Afrin that the Turkish state wishes to strengthen Kashmir.

Abu Emsa said Turkish officers would also ask the commanders of other SMO gangs to state the names of those who would like to go to Kashmir.

Abu Emsa said those leaving his gang would join the list and receive $2,000 in funding. He told members of his gang whom he met in Schiege that Kashmir is as mountainous as Karabakh.

Local sources told the Turkish state that it has been conducting this activity in Ezaz, Gerablus, Bap, Afrin and Idlib for a short time, thus choosing the names of the gangs that will be secretly transferred, according to the reports in ANF.