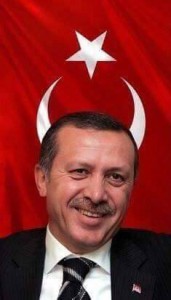 President Recep Tayyip Erdogan said on Thursday that Turkey’s military offensive in northern Syria will target the town of Manbij, captured from ISIS by Syrian Kurdish-led forces in August, and the jihadists’ stronghold of Raqqa.

Syrian rebels, backed by Turkish warplanes, tanks and artillery, launched the “Euphrates Shield” operation in August to push ISIS and Kurdish militia forces away from the border area of northern Syria.

In a speech in Ankara broadcast live, Erdogan said he had informed U.S. President Barack Obama about his plans for the operation in a telephone call on Wednesday. Before Manbij and Raqqa, the operation will target the town of al-Bab, he said.

The rebels are now advancing on al-Bab to clear ISIS elements. After retaking the city, they will target Manbij, and “then we will go towards Raqqa,” Erdogan stated.

According to the White House, Obama cited during the phone conversation the need for close coordination between the U.S. and Turkey to apply pressure on ISIS in Syria.

Turkey has been angered at Washington’s support for the Kurdish YPG militia in its battle against ISIS in Syria, with Ankara regarding it as a hostile force with deep ties to Kurdish militants fighting in southeast Turkey.

A top U.S. military commander said on Wednesday YPG fighters will be included in the force to isolate Raqqa. Arab forces, and not Kurdish ones, are expected to be the ones to take the city itself, U.S. officials say.

Defense Minister Fikri Isik told state broadcaster TRT on Thursday that Turkey had asked Washington not to allow the YPG to enter Raqqa, saying it was ready to provide the necessary military support to take over the town.

Erdogan also said that the Iraqi region of Sinjar, west of Mosul, was on its way to becoming a new base for Kurdistan Workers Party (PKK) militants and that Turkey would not allow this to happen.

The White House said Obama welcomed continued dialogue between Turkey and Iraq to determine the appropriate level and form of Turkey’s participation in countering ISIS in northern Iraq.

It said the two leaders affirmed their support for Iraq’s sovereignty and the need to deny a haven to the PKK.