You are here: Home / MidEastGulf / Erdogan, Merkel say Syrian transition could include Assad 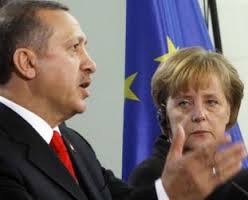 Turkish President Recep Tayyip Erdogan and German Chancellor Angela Merkel separately said on Thursday that Syrian President Bashar al-Assad could have a role in transition of power in Syria.

Erdogan, who is a fierce critic of Assad, suggested for the first time that the Syrian president could have a role to play in a future political transition

“The process could possibly be without Assad, or the transitional process could be with him,” Erdogan told reporters after Eid prayers in Istanbul, when asked about a possible solution to Syria’s four-year civil war.

But “nobody envisages a future with Assad in Syria,” Erdogan added, saying it was “impossible for them (Syrians) to accept a dictator who has led to the deaths of up to 350,000 people.”

Erdogan’s remarks, which came a day after he held talks with Russian President Vladimir Putin, an ally of Assad, mark a shift from the Turkish leader’s previous insistence that the Syrian leader relinquish power.

Turkey backed Assad’s regime until the outbreak of the civil war in 2011, after which it switched its support to rebels fighting to overthrow him.

Erdogan’s remarks chimed with a comment earlier by German Chancellor Angela Merkel after a summit on the refugee crisis fuelled by the Syrian war.

“We have to speak with many actors, this includes Assad, but others as well,” Merkel said.

“Not only with the United States of America, Russia, but with important regional partners, Iran, and Sunni countries such as Saudi Arabia,” Merkel added.

Meanwhile, U.S. Secretary of State John Kerry said last week the U.S. was prepared to “negotiate” with Assad on the conditions and timing of his exit.