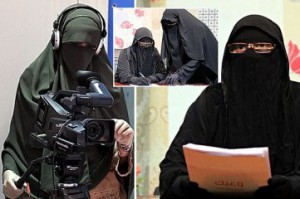 English-speaking female jihadis have been using social media to try to lure western Muslims to join them with Islamic State in Libya, a new front in the war on terror just 400 miles from Europe’s shores.

Three native English-speaking women have been monitored for months by the Institute for Strategic Dialogue, a UK-based thinktank, and are believed to be British. They say they have been living in the wartorn north African country since at least the start of the summer.

Using a variety of social media platforms, including Twitter and encrypted messaging apps such as Surespot and Telegram, the three have reached out to their hundreds of followers, and as routes into Syria via its 500-mile border with Turkey have become further restricted they have advertised the journey to Libya as the easiest way of joining Isis’s so-called caliphate.

Isis has been in Libya for just over a year and the country is home to its largest forces outside of the Middle East. The group has its headquarters in the northern coastal town of Sirte, birthplace of Libya’s late dictator Muammar Gaddafi, but also has a training base to the west of the capital, Tripoli.

Melanie Smith, ISD researcher and an expert in western female jihadis, said evidence of women travelling to Libya to start a new life under Isis represented a dangerous tipping point.

In late June one woman calling herself Umm [sister] Unknown wrote: “Come to Libya. Hijra [religious migration] is not only to Shaam [Syria] now. Libya needs you too.”

The same day, she added: “5 brothers made hijra about a month ago and they are all shaheed [martyred] … the mujahideen in Libya need you!!!!”

Umm Unknown’s Twitter account was operational for nearly two years before being suspended. She stated she arrived in Libya on 19 June 2015, posted links to various events in Libya, and had connections with one verified English-speaking fighter in Libya and the two other native English-speaking women also understood to be in the country.

A second extremist going under the name Umm Asiyah, questioned via Ask.fm, an online question forum, why she had gone to Libya, replied: “To live under the Shariah [law] of Allah.” She also tweeted about the pain of leaving her family. On 2 July she wrote: “Every time I hear my mom’s voice I die a little may Allah get her out of Darul Kufr [land of unbelief].”

A week earlier she tweeted that getting to Libya was “not as hard” as travelling in Turkey.

The third radical, Umm Mus’ab, said she had arrived in Libya as early as May 2015, telling her followers to “Come to the land where no man will ever see your face.” Commenting on life in Libya she replied: “It’s mind bogglingly great.”

While none of the now-suspended accounts made any explicit mention of a previous existence in the UK, Smith said other pieces of evidence pointed towards British associations.

“The type of colloquialisms they use are quite common among the other British women we follow who are in Syria and Iraq; very similar language, very similar slang, and references.”

Smith added that their social media networks were “very British-heavy” and they associated with known UK jihadis fighting abroad and domestic UK extremists.

This week a jihadi from east London who is living in Isis’s self-proclaimed capital of Raqqa, Syria, encouraged her followers to go to Libya. The woman, who is in her early 20s and of Pakistani heritage, is understood to have become a widow after her husband was killed in mid-July.

“How many brothers & sisters rn in Turkey, cannot go back home and cannot enter in … Make your Visa and go to #IS in #Libya,” she wrote on Twitter adding, “we need to raise more awareness”.

Smith said the trend of looking to Libya as a new area for extremists was growing. “They [jihadis] speak about Libya as the new frontier and as an extension of the caliphate. And it appears that the game plan [for a terrorist attack] would be to go through Libya and up into Europe. So the proximity of Libya being on the tip of north Africa is geographically quite worrying.”

From its stronghold in Sirte, Isis has pushed along the coast east and west, and south into the Sirte basin, the largest concentration of Libyan oil fields. More than a dozen fields have been overrun with engineers killed and at least nine kidnapped.

Its second base is on the outskirts of Sabratha, west of Tripoli. That area belonged to Islamist militia Ansar al-Sharia, the group blamed by Washington for the killing of US ambassador Chris Stevens in Benghazi in 2012, until it declared its loyalty to Isis.

At the Sabratha base, a former military depot outside the town, volunteers receive training, many then leaving for Iraq, Syria and Tunisia. Tunisia’s government said the homegrown attackers who struck at tourists in the capital’s Bardo museum and Sousse beach resort earlier this year were trained at this base.

Isis has grown because Libya’s elected government is battling an Islamist-led force, Libya Dawn, which last year captured Tripoli, plunging the country into civil war. Sirte lies along the faultline between the recognised government’s forces in the east and Libya Dawn units in the west, both of which have fought sporadic clashes with Isis.

Reports from Libya indicate that foreign volunteers are flocking to Isis from Tunisia and sub-Saharan Africa. There is also evidence that many British volunteers for Isis move to Syria via Tunisia and Libya where they receive training before going on to Turkey to transit to Syria. The route makes them harder to detect among the hundreds of thousands of British tourists who flock to Tunisia. However, this is the first evidence that Brits are choosing to settle in Libya itself.

A UK government spokesman said: “The UK advises against all travel to Libya. Anyone who does travel, for whatever reason, is putting themselves in considerable danger. People seeking to travel to engage in terrorist activity overseas should be in no doubt we will take the strongest possible action to protect our national security.”