You are here: Home / Europe / ‘English mafia’ are smuggling economic migrants into Britain 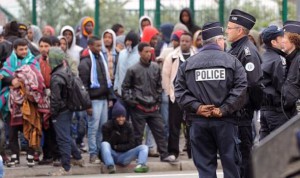 ‘English mafia’ are involved in trafficking migrants into Britain from the north of France, according to the mayor of a town where camps have been set up.

Violent people-smugglers with British accents use guns and threats against migrants, says Franck Dhersin, mayor of Teteghem, near Dunkirk.

The mobsters are driving the migrants to truck-stops on the coast from the camps and telling them to stow away on lorries, the BBC reported.

He added that he had tried to enter the camp near his town, in Nord-Pas-de-Calais, but that a man there had shown him a gun and threatened to rape a woman reporter he was with. The police had told him not to return.

Mr Dhersin said they had been operating in the area for a number of years, but had now become more organised.

The BBC reported that British-registered cars were seen at the camp in Teteghem and at another on the outskirts of Dunkirk.

A Syrian migrant, speaking on condition of anonymity, said he had paid people-smugglers £15,000 so far to try to reach Britain – including £3,000 paid to British traffickers to get him across the Channel.

Traffickers threatened violence if he did not follow orders, the Syrian man added.

“They have guns. They put it to someone’s head and said ‘You move again and I will kill you’.”

Pascal Aerts, of the French police, said: “I don’t have proof that they’re English but we know perfectly there [are] links between the traffickers and the receivers in Great Britain, and with the traffickers who work in France.”

Ukip MEP Mike Hookem this week claimed a migrant had threatened him with a handgun when he visited a migrant camp on the outskirts of Dunkirk.

A Home Office spokesperson said: “We are working closely with the French authorities to deal with the situation in northern France.

“We are increasing joint intelligence work to target the organised crime gangs behind people smuggling and … work closely with [our] French counterparts.

“The UK is playing a leading role in pushing for action through the EU and the UN to tackle the causes of illegal immigration and the organised trafficking gangs behind it that exploit migrants at each stage of their journey.”