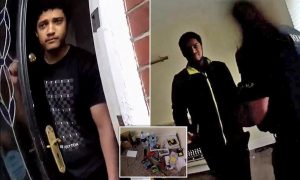 A Daesh fanatic plotted a ‘lone wolf’ attack on the British army or police using knives and a specially adapted drone, a court heard.

Hisham Muhammad, 25, was found with an array of weapons at the house he shared with his cousin Faisal Abu Ahmad, the Old Bailey was told.

They included a tomahawk, a machete and ‘Ninja eggs’ containing chilli seeds and shards of glass. He was also making a drone attachment using lollipop sticks to drop a ‘harmful’ device on his target, it was claimed.

Muhammad had researched police and army bases, including Castle Armoury Barracks, in Bury, Greater Manchester, which he visited before his arrest last June, the court heard.

The Bermudan national, who moved to Britain in 2013, had allegedly helped fund his activities with money from a bogus online escort agency scam. He was arrested after his landlord spotted ‘suspicious’ items at his home.

Anne Whyte QC, prosecuting, said Muhammad had steeped himself in Daesh propaganda. She told jurors he ‘intended to commit an act of terrorism’, combining ‘use of a drone with plans to stab human targets’.