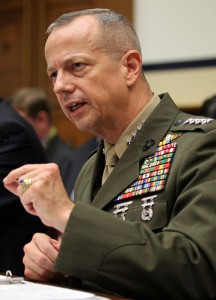 Ending the conflict in Syria and Iraq is key to solving the migrant crisis facing Europe, a senior US official has told the BBC.

Gen John Allen, special presidential envoy for the US-led coalition fighting the Islamic State (IS) group, said IS had to be defeated and Syrian President Bashar al-Assad “had to go”.

He said it was “heart-wrenching” to see people fleeing the region.

But he added that the coalition was in a stronger place than a year ago.

Europe is struggling to deal with an enormous influx of refugees and migrants, mostly from Syria but also from Iraq and other countries, fleeing violence and poverty.

“The millions who are fleeing their homes, that’s not just about Daesh,” said Gen Allen, using an Arabic name for IS.

“It’s also about the conditions in the region, the horrendous conditions that are a direct result of Bashar al-Assad and several years of the civil war.”

Asked if he felt responsible for those fleeing to Europe, he said: “I feel that we can help them. We have worked very hard to help in the humanitarian crisis in that region.”

“We’ve got to solve the conflict though. The conflict has got to be solved at a political level and a global level.”

“We are going to see that the manifestation of that conflict will play out in a number of ways – right now it is playing out in this heart-wrenching vision of the people who are streaming out of the region.”

Gen Allen described IS as a “manifestation of an absence of hope for so many people”.

“This instability has been created by Bashar al-Assad and that regime. He ultimately chose to make war on his own people. That ultimately created the crisis that we face today.

“So it’s not just about dealing with Daesh, it’s about creating the conditions that can put us on track for a political diplomatic solution as well.”

He added: “Bashar al-Assad has got to go. He is both a point and a representation of what has caused so much instability in the region and so many people to want to fight, to fight him and to fight each other.”

He said IS was being pushed back on several fronts and progress had also been made on a political level in Iraq.

“Where we are today compared to where we were a year ago is pretty dramatically different,” he said.

“In the context of just governance alone in Iraq we are dealing with a real partner in Prime Minister Haider al-Abadi. He’s come a very long way in the year that he’s been prime minister, farther certainly than he predecessor.”

Last September, US President Barack Obama announced the formation of a broad international coalition to combat IS, which has seized large swathes of Syria and Iraq.

Despite the coalition’s efforts, militants have made gains in some areas, including at Ramadi in Iraq and at Palmyra in Syria.

Iraq’s government promised to retake Ramadi back in May, but so far it has only managed to encircle the city.

However, Kurdish forces have forced IS back to a frontline about 50km (30 miles) from the city of Raqqa – the group’s de facto capital in Syria.