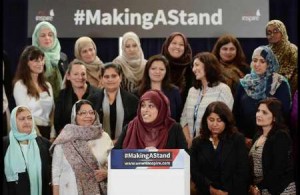 “Women can be powerful poles for positive change and participate in innovative efforts to inform, shape and implement policies and programs to mitigate the effects of conflict and violent radicalization”, said Gyorgy Busztin, Deputy Special Representative of the United Nations Secretary-General for Iraq (DSRSG), at the opening of the two-day National Conference on ‘Empowering Women to Address the Impact of Terrorism’ on Monday.

The Conference, which brings together key government and United Nations officials, religious leaders, civil society representatives, and representatives of the international community, is jointly organized by the UN, the State Ministry of Women’s Affairs and the Kurdistan Region’s High Council of Women’s Affairs in Erbil, according to a press release faxed to IRNA on Tuesday by the United Nations Information Center in Tehran.
The conference will focus on the impact of violent extremism and terrorism on Iraqi women and girls, particularly those from minorities’ communities; empowering women to counter radicalization and combat terrorism; participation of women in social cohesion and reconciliation; creating opportunities to enhance women’s representation and participation in power and decision-making; the role of the media and the internet in countering extremism; effective partnering in implementing frameworks on women, peace and security; and the role of women in building peace.
Moreover, the Conference builds on the regional conference “Women’s Resistance to Extremism and Terrorism and their Struggle for Rights, Peace and Security”, held in May 2015 in Erbil and on the endorsement of the Special Emergency Plan on the Implementation of Security Council Resolution 1325 by the Council of Ministers in May as well. The Special Emergency Plan takes into consideration the impact of the current fight against ISIL on women, peace and security.
“Iraq is particularly well placed to host this conference, being the first country in the Middle East and North Africa region to have a National Action Plan to implement SCR 1325”, said DSRSG Busztin, while underscoring that “within families, women’s traditional roles allow them to shape familial and social norms and promote increased tolerance and non-violent political and civic engagement”.
“Countering terrorism policies need to take into account how terrorism impacts women and to ensure that they do not lead to negative and unintended consequences on women”, he stressed.
It is expected that the conference will adopt a set of recommendations outlining key actions to advance the women, peace and security agenda; ensure women participation in countering terrorism efforts; and prevent and respond to sexual violence in conflict.
The conference is a response to United Nations Security Council Resolution 2178 of September 2014, which called for the first time for the empowerment of women to counter violent extremism.