You are here: Home / Africa / Emir of Kano describes Sudan as “fountain of ancient Islamic scholarship” 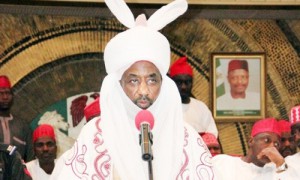 The Emir of Kano, Alhaji Muhammadu Sanusi ll, on Tuesday, described Sudan as one of the most respected citadels of scholarship in the world.

He made the remark while delivering a Keynote address at the opening of the First Nigeria-Sudan International Conference in Kano.

The conference was organised by Bayero University Kano, in conjunction with two prominent universities in Sudan.

The Emir said Sudan had immensely contributed its own share of Islamic scholarship, which was presently serving as catalyst in the promotion of the knowledge required to foster cordial relations between the two countries.

He added that “Sudan has carved a niche in the parlance of Islamic Diplomacy with Nigeria even before the advent of the modern diplomacy.

“It has also been widely recognised and respected all over the world, having served as renowned hub of political and economic diplomacy.’’

According to him, the Northern part of Nigeria is sharing many things in common as far as the issue of socio-cultural ties is concerned.

He said Sudan had made its mark in forging appreciable academic collaboration with the outside world, especially in Northern Nigeria.

He, however, explained that the remarkable feats achieved had been scuttled as a result of European expansionist programme.

“The political and economic development of many African countries would have been greatly enhanced if the colonial masters had not invaded the continent,’’ he said.

The monarch called for effective collaboration between the two countries by bringing forward the concept of effective communication in line with modern global trend.

He said “we consider the issue of partnership as paramount, especially now that many universities in the world are competing to attain the highest peak of academic excellence.’’

He added that being the first of its kind, the conference would serve as springboard for stock taking in the area of effective communication and diplomacy.

The papers slated for presentation by eminent scholars during the conference will serve as archive of reference by students of contemporary history, he noted.