You are here: Home / Africa / Embassies exodus from Sana’a begins, Somalia the 1st to move to Aden 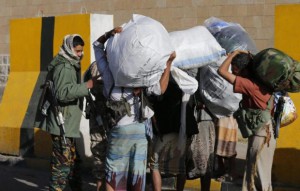 Somalia was the first country on Tuesday to relocate its embassy from Sana’a to the temporary capital of Aden. Yemen welcomed the decision and called on other states to follow suit.

A high-ranking source at the Yemeni foreign ministry said the Somali move is considered a support to the legitimate government headed by President Abd-Rabbuh Mansour Hadi and the brotherly relations that link both countries, according to Yemen’s official news agency.

The source called on other brotherly states to quickly take similar steps at a time when Sana’a remains invaded by rebels.

Despite the fact that all Arab and foreign embassies are still located in the Yemeni capital, most ambassadors to Yemen are performing duties in their country’s embassies located outside Yemen, particularly in Saudi Arabia.

After Houthis invaded the capital Sana’a in September 2014, rebels attacked a number of embassies and vandalized them. Some missions were even transformed into centers from where the war was managed.

The Somali step also came weeks following the arrival of the Yemeni government to Aden from where most ministers resumed their missions.

Separately, other informed Yemeni sources said that due to mounting disputes between Houthis and former President Ali Abdullah Saleh, particularly the rebels’ attempt to completely control the Presidential Guard forces, the former head of state was able to move his family members including his children, his nephews and their wives and grandchildren, from Sana’a to Oman’s capital, Muscat, using a U.N. airplane.

Asharq Al-Awsat repeatedly contacted the office of U.N. Envoy to Yemen Ismail Ould Cheikh Ahmad for comments. But, there was no response.

Yemeni political activist Ahmad Yahya Ayed told Asharq Al-Awsat that the decision of Saleh to move members of his family outside Yemen could have been taken for three reasons: Mounting disputes between him and Houthi rebels, fears the National Army and Popular Resistance could reach Sana’a, or plans to strike a deal with the alliance behind the back of Houthis.