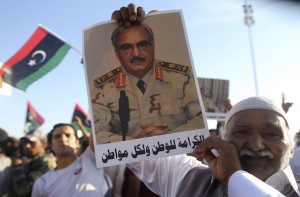 The Egyptian President, Abdel Fattah el-Sisi, said his country fully supports the “Libyan Army” led by Khalifa Haftar as it supports the Syrian Army under the command of Bashar Al-Assad.

In a TV interview with a Portuguese channel, el-Sisi said their priority is to back up what he called the Libyan Army for it to have full control of the Libyan soil in order to stem terrorism and prevail stability and security.

Many reports have surfaced lately showing logistic and military support given by the Egyptian military to the Haftar Operation Dignity forces in their alleged war on terror in eastern Libya, especially in Benghazi.

Last year, Egyptian airplanes carried airstrikes on Derna residential houses killing and injuring a number of civilians and the Egyptian President later admitted carrying out the bombing on media.