You are here: Home / Mediterranean / El-Sisi calls on army to be prepared amid Libya crisis 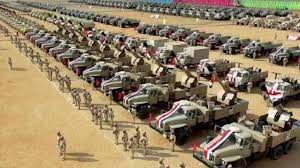 Egyptian President Abdel Fattah El-Sisi has directed the army to maintain the highest levels of preparedness and combat readiness to protect Egypt’s national security, like reported by arabnews.com.

During a meeting with various senior military personnel, the president directed them to continue to maintain combat readiness to carry out any tasks entrusted to them, in light of the current challenges in the region.

The meeting came a day after El-Sisi sent an important message to the commander of the Libyan National Army (LNA), Field Marshal Khalifa Haftar. The message was delivered by the director of the Egyptian Military Intelligence, Maj. Gen. Khaled Megawer, at the LNA headquarters in Ar Rajma outside the eastern city of Benghazi. The content of the message was not revealed.

The message and El-Sisi’s statements come after the Turkish and Qatari defense ministers visited Tripoli to meet with the Head of Turkish-backed Al-Wefaq Government, Fayez Al-Sarraj.

Libyan media reported that the two ministers held talks about military support with officials in the unconstitutional Al-Sarraj government that currently controls Tripoli. They also held meetings with some senior militia figures.

July 2020, the Egyptian president chaired a meeting of the National Defense Council to discuss the Libyan situation, as well as the Renaissance Dam crisis.

The spokesman for the Egyptian president stated that the council had addressed the country’s current political, security and military situations, within the framework of various regional and international developments.

The council discussed the situation in Libya in the western theater, in light of Egypt’s efforts to stabilize the current situation and to bring peace to all the various parties.

The council affirmed the strong ties between the two countries, and that Egypt would spare no effort to support its neighbor to help its people overcome the current crisis.