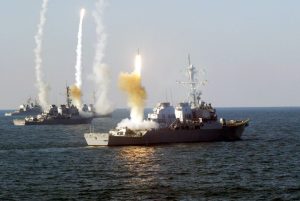 The USS Dwight D. Eisenhower Carrier Strike Group is participating in Operation Inherent Resolve with new airstrikes, the Navy said on Wednesday according to upi.com.

Missiles were launched by Carrier Air Wing 3 against Islamic State positions in Iraq and Syria from the strike group’s position in the Eastern Mediterranean Sea, the Navy statement said.

The air launches came after IS took responsibility for an attack this week at Palma, Mozambique.

“We can provide a wide range of options to our nation and allies in deterring adversarial aggression and disruption of maritime security and regional stability,” Robertson said.