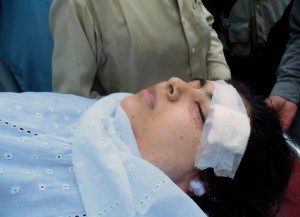 Eight of the 10 Taliban militants jailed for the attempted assassination of Pakistani schoolgirl Malala Yousafzai have reportedly been released, just weeks after they were imprisoned, following a secret trial confirmed by officials.

Just two militants accused of the attempted murder of the Pakistani schoolgirl have been convicted and are currently serving the 25 year sentence that the Pakistani authorities claimed had been given to all 10 suspects. All 10 men are believed to be members of the Tehrik-i-Taliban Pakistan (TTP) terror group.

“10 men are not behind bars, as the Pakistani authorities would have us believe. That is a big lie,” a security official told the Daily Mirror.

It was revealed that a secret retrial took place, with only a judge, public prosecutor and members of the armed forces present to witness their release.

“The trial had ­absolutely no credibility as nobody was there to witness it but a public prosecutor, a judge, the army and the accused,” the source added. “This was a tactic to get the media ­pressure away from the Malala case because the whole world wanted ­convictions for the crime.”

“But the truth is that, whether these acquitted men were involved or not in the Malala shooting, the public has been lied to.”

Azaad Khan, the police chief for Pakistan’s Swat Valley where the incident took place, identified the two Taliban prisoners serving their sentences as Izharullah and Israr ur Rehman, according to the newspaper.

In April, a Pakistani judge found all 10 men guilty of the “planning and execution” of the 2012 assassination attempt which left the education activist seriously wounded. Then 14-year-old, she was shot in the head while travelling on a bus to her school in Pakistan’s Swat Valley. She was flown to Birmingham in Britain for emergency surgery and she remains in the country today.

Last year, the Pakistani Taliban claimed responsibility for a massacre at a school in Peshawar, in which a number of the group’s militants stormed the building wearing suicide vests, killing 141 people, including 132 children. In response to the attack, Pakistani prime minister Nawaz Sharif reinstated the death penalty for terrorism cases, resulting in a number of executions.