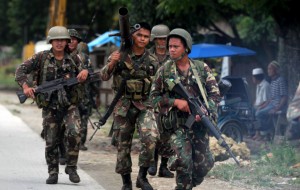 Eight members of a criminal gang that pledged allegiance to Islamic State in Iraq and Syria (ISIS) militants were killed in a firefight with the military in the southern Philippines, officials said on Friday (Nov 27).

The hour-long battle took place on Thursday (Nov 26) in Palimbang, a remote town in the south, which is home to the predominantly Catholic nation’s Muslim minority and the scene of decades of conflict.

The bandits were from Ansar al-Khalifa, a small group that declared its support for ISIS in a video circulated on the Internet last year, regional military spokesman Major Filemon Tan said.

The military has said that support for ISIS – which controls vast swathes of territory in Syria and Iraq – in the Philippines was limited to local bandits claiming allegiance to the group.

But it has said there is no evidence showing that such gangs were receiving support from the militants.

The larger Abu Sayyaf group, a United States-listed terrorist organisation that is holding at least four foreign nationals hostage and has demanded millions of dollars in ransom, has likewise pledged allegiance to ISIS.

Tan told AFP that five black flags similar to those used by ISIS fighters were recovered from the bandits after the clash.

Criminal gangs operate kidnap for ransom and extortion activities alongside Muslim and communist separatist campaigns in the restive south.

While the relatively new Ansar al-Khalifa had extorted from businessmen and stolen cattle from farmers, it had no proven links with ISIS national military spokesman Colonel Restituto Padilla said.

“This group is trying to ride on the popularity of the ISIS, but they’re not really ISIS,” he told AFP. “We view them as mere criminal gangs.” Tan said the military was verifying intelligence reports that one of the eight killed was an Indonesian national.

Some three dozen others who involved in the encounter escaped after the fighting, he added.