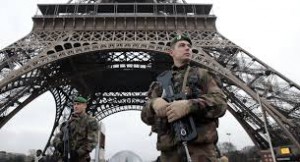 Three men spotted carrying backpacks were behind the security alert that saw the Eiffel Tower closed to visitors, according to a police source.

The Parisian tourist attraction was shut on Sunday after the men were seen by a police helicopter scaling the 986-foot structure just before 9am local time.

A spokesman for the Parisian police told told Le Figaro newspaper they were not ruling out the possibility there were three men involved.

The police source said: “There is a strong likelihood that the suspects were able to flee in the morning by parachute before police arrived.”

Hundreds of people were queueing to get into the attraction when they were turned away and a police cordon was set up. It was later reopened at 2pm.

France has been on high alert since since the Charlie Hebdo massacre in January when Islamist terrorists murdered 12 people in the offices of the satirical magazine for publishing cartoons of the Prophet Mohammad.

In August, three passengers on a train from Amsterdam to Paris subdued a gunman attempting to open fire.

A policeman at the site told Agence France Presse the three men could possibly have been extreme sportsmen attempting to parachute off the structure without permission, but that they had to be vigilant.

Isis and Al-Qaeda have previously said they would target the Eiffel Tower- which is France’s most popular tourist attraction. So far, no arrests have been made.