You are here: Home / Mediterranean / Egypt’s Sisi is first leader from Arab world to congratulate Trump 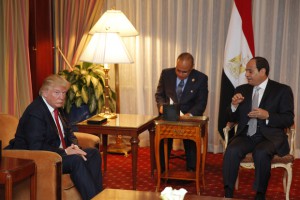 Egyptian President Abdel Fattah el-Sisi was the first leader from the Arab world to congratulate Donald Trump on Wednesday and said he hoped the US president-elect would “pump new life” into Egyptian-American relations.

A statement from the Egyptian presidency emphasised the “special, strategic relationship” between Egypt and the United States that it said had lasted for decades.

“The Arab Republic of Egypt is looking to see Donald Trump’s presidency pump new life into the course of Egyptian-American relations, and more cooperation and coordination that will benefit both the Egyptian and American peoples, and promote peace and stability and development in the Middle East region, especially in the face of the huge challenges that it faces,” the statement read.

Trump met with Sisi in New York last September at the United Nations; the first time a Republican presidential candidate had met a leader from the Muslim world.

Trump told Sisi that “under a Trump administration, the United States of America will be a loyal friend, not simply an ally, that Egypt can count on”.

Sisi came to power after staging a military coup against Egypt’s first democratically elected president Mohammed Morsi, who hailed from the Muslim Brotherhood.

The former defence minister’s harsh crackdown against the group and its supporters led to the killing of hundreds of unarmed protesters, and the jailing of thousands.

On 14 August 2013, security forces violently dispersed protests at Rabaa square, the focal point of pro-democracy protests during the crisis.

More than 1,150 people were killed across Egypt – 817 in Rabaa alone – in what Human Rights Watch has called the “worst single-day killing of protesters in modern history”.

Obama briefly suspended arms sales to Egypt in response, and though he later reversed that decision, relations between Washington and Cairo have not yet recovered.

Instead, Egypt has chosen to play the US off Russia, with whom the Arab world’s most populous country has had increasingly warm relations.

Egypt is in talks to allow Russia use of military bases across the country, including an air base on the Mediterranean coast close to the border with Libya, Russian media reported last month.

Russia is especially keen to renovate an ex-Soviet naval base in the coastal town of Sidi Barrani, which was used until 1972 to monitor US warships in the Mediterranean, Russian foreign and defence ministry sources told local daily Izvestia.

According to the source, an agreement could see the Sidi Barrani base be ready for use as an air base by 2019.