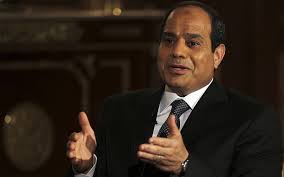 Sisi was quoted in British newspaper the Daily Telegraph ahead of a visit to London in which he is to discuss security co-operation with Prime Minister David Cameron.

“Libya is a danger that threatens all of us. If there is no government then this only creates a vacuum where extremists can prosper,” Sisi said, according to the Telegraph.

“It was a mission that was not completely accomplished… We must support all efforts to help the Libyan people and the Libyan economy.”

Libya has descended into chaos since longtime dictator Kadhafi was ousted in 2011 and killed in the midst of an uprising supported by NATO states.

Chronic insecurity, with armed groups battling to control its energy resources and two governments vying for power, has made Libya a key launching point for people smugglers feeding Europe’s migrant crisis by sending boatloads of people across the Mediterranean.

“We need to stop the flow of funds and weapons and foreign fighters to the extremists. All the members of NATO -– including Britain –- who took part in the mission to overthrow Kadhafi need to give their help,” Sisi said.

In the interview, Sisi dismissed claims that a Russian airliner that crashed in Egypt’s Sinai Peninsula could have been brought down by a missile or bomb as “unfounded speculation”.

He also criticised Western efforts to combat Islamic State militants in Iraq and Syria, according to the Telegraph, saying: “The map of extremism and instability is expanding and not retreating. We need to reassess our priorities.”