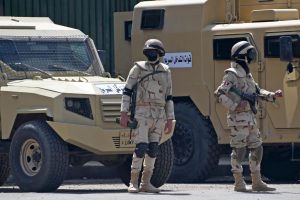 Egypt’s parliament has approved the deployment of troops outside the country to protect “national security”, days after politicians allied to eastern commander Khalifa Haftar urged Cairo to intervene militarily in the country’s war, like reported by middleeasteye.net.

Egypt’s House of Representatives, packed with supporters of President Abdel Fattah el-Sisi, approved the plan after a closed-door session on Monday.

The parliament unanimously approved “the deployment of the Egyptian armed forces on combat missions outside Egypt’s borders to defend Egyptian national security… against criminal armed militias and foreign terrorist elements”, it said in a statement.

The deployment would be made on a “western front”, the statement said – a likely reference to western neighbour Libya.

Since 2014, Libya has been split between areas controlled by the internationally recognised Government of National Accord (GNA) and territory held by forces loyal to Haftar.

Turkey, along with regional ally Qatar, has backed the GNA, while Russian mercenaries, the United Arab Emirates and Egypt have supported Haftar’s Libyan National Army (LNA).

Both sides in Libya’s civil war have been mobilising for weeks for a battle over Sirte. In January, Haftar’s forces took control of the coastal city, the birthplace of former leader Muammar Gaddafi and once a stronghold of the Islamic State group.

The GNA has halted its advance outside the city, a strategic access point to Libya’s key oil fields, which remain under Haftar’s control.

Before the vote, the Egyptian presidency said Sisi had agreed with US President Donald Trump to maintain a ceasefire in Libya and avoid any escalation.

The US has sent mixed signals to the rival sides over the course of the war, but has become increasingly concerned about Moscow’s growing influence in Libya, where hundreds of Russian mercenaries back Hafter’s forces.

Last week, the US military’s Africa Command (Africom) accused the Wagner Group, a Russian paramilitary organisation, of “indiscriminately” placing “booby traps and minefields” in or around Tripoli, further violating the United Nations’ arms embargo on Libya.

Earlier on Monday, Turkey demanded an “immediate” end to international support for Haftar after trilateral talks were held in Ankara between Libyan, Turkish and Maltese officials.

“It is essential that all kind of help and support given to putschist Haftar – which prohibits ensuring Libya’s peace, tranquillity, security and territorial integrity – ends immediately,” Turkish Defence Minister Hulusi Akar said.

Also on Monday, the UN called on the warring sides to immediately engage in a ceasefire, with Stephanie Williams, the acting head of the UN support mission in Libya, demanding “an end to the blatant violations of the UN arms embargo”.