You are here: Home / Analysis / Egypt’s Muslim Brotherhood a greater threat when weakened 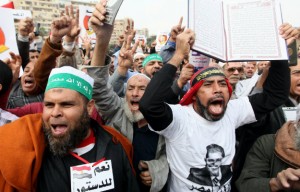 A research paper conducted by the United States’ Central Intelligence Agency (CIA) on Egypt highlighted the growing force of the Muslim Brotherhood organization, considering it an immediate threat to U.S. interests, like reported by aawsat.com .

Despite the alarm, the report says that targeting the group may snowball into a far more perilous status quo, as removing the Brotherhood from the picture leaves the stage empty for ultra-extremist groups that are far less U.S. tolerant. The Muslim Brotherhood is an Islamic organization that was founded in Ismailia, Egypt by Hassan al-Banna in March 1928 as an Islamist religious, political, and social movement.

The report dated back to December 1986, reflecting on the period during which former Egyptian President Hosni Mubarak was at his prime. In practice, the paper reflected on the threats facing the Mubarak administration should corruption and mishandling of authority persist. More so, it projected that Mubarak will be brought face to face with a popular movement in which the ‘Brotherhood’ plays a pivotal role.

Egypt’s ‘Brotherhood’ organization would lead protests against the regime— paradoxically, the paper also showed that the ‘Brotherhood’ had established a form of political cooperation with the Mubarak administration.

Excerpts provided by the research revealed that the ‘Brotherhood’ organization is an essential curbing factor for all extremist groups. CIA intelligence experts have warned as well that the fundamentalist organization cannot be trusted, a conclusion derived of previous attempts at striking an alliance with the group.

CIA analysts add that Egypt’s ‘Brotherhood’ is greatly anchored by its extensive funding network, given that internal disagreement and dispute make up the body’s Achilles heel.

The group spread to other Muslim countries but has its largest, or one of its largest, organizations in Egypt, where for many years it has been the largest and most disciplined political opposition force, despite a succession of government crackdowns in 1948, 1954, and 1965.

Following the 2011 Revolution the group was legalized, and in April 2011 it launched a civic political party called the Freedom and Justice Party (Egypt) to contest elections, including the 2012 presidential election when its candidate Mohamed Morsi became Egypt’s first democratically elected president.

One year later, however, following massive demonstrations, Morsi was overthrown by the military and arrested.