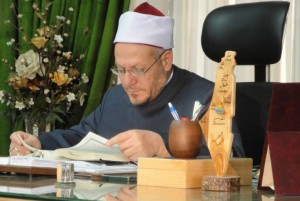 Egypt’s Grand Mufti Shawky Allam, one of the country’s most senior religious authorities, denounced on Tuesday the Islamic State’s burning of four Iraqi Shia fighters earlier this week, describing it as “barbaric and cowardly.”

The group burnt alive four Iraqi victims by chaining them from their hands and feet and setting fire to a rope doused with petrol with a flame then engulfing their bodies.

The video of the incident showed the latest of a slew of grisly mass executions and atrocities committed by the Sunni radical group that controls large parts of Iraq and Syria.

“Such acts committed by the terrorist group contradict the principles of true Islam and the path of the Prophet [Mohammed] and contravene all international norms and laws,” Allam said.

Allam, who issues the country’s religious edicts, urged the international community to work together to eradicate the “epidemic” of terrorist groups like the Islamic State and their brutal crimes.

Earlier this year, Islamic State fighters beheaded 20 Egyptian Christians in Libya. In February, Egyptian jet fighters bombed IS group targets near the the eastern coastal city of Derna in Libya.