You are here: Home / Europe / Egypt’s FM Shoukry in Rome for talks on Libyan crisis with Italy and Algeria 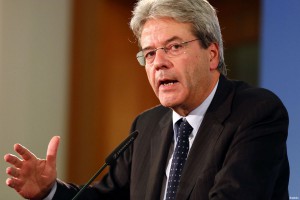 They will discuss the latest developments of the conflict in Libya, the spread of terrorism and how to establish peace and stability in the country, said Atty.

After a Libyan branch of the Islamic State (IS) group beheaded 20 Egyptian Copts in February, Egypt and the Tobruk-based Libyan government are coordinating their efforts to obtain international support for combating terrorist in the oil-rich country.

Gentiloni has previously pledged that Italy would fight in Libya as part of an international mission, according to the state-run Al-Ahram.

Following the ouster of Muammar Gadhafi in 2011, Libya has descended into factional fighting, with different militias and group controlling various parts of the country. A government based in the eastern city of Tobruk is the most widely recognized internationally.

In February, Libya and Egypt asked the United Nations Security Council to lift an arms embargo on Libya, and impose a naval blockade on areas not controlled by the country’s internationally recognized government and help build the country’s army to tackle IS and other militants.