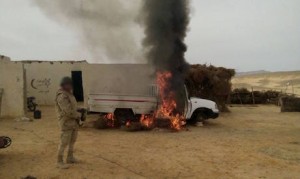 Egypt’s army said it has killed three militants during a raid on two terrorist hideouts in central Sinai, a statement by the armed forces reported by ahram.org.eg.

Three militants were killed and two others injured in the offensive.

Eleven other militants were arrested.

The army said it was able to destroy a storehouse containing explosive materials, three four-wheel-drive vans, and three motorcycles believed to be used by the militants in their operations.

The offensive came one day after the army announced the deaths of five personnel late Sunday in a terrorist attack in Sinai.

No further details were given on the terrorist attack or its location.

Egypt’s army and police forces have been waging a war over the past three years against an Islamist militant insurgency in North Sinai; hundreds of security personnel and many militants have been killed in the violence.