You are here: Home / Mediterranean / Egypt’s Al-Sisi stresses his country’s support for Haftar’s army in Libya 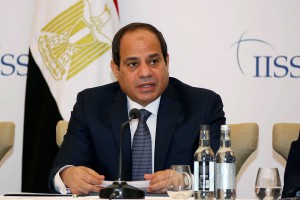 Egypt’s President Abdel Fattah Al-Sisi said on Monday that his country supports the Libyan National Army in its fight against “extremist” groups and that Cairo also supports the current unity government headed by Fayez al-Sarraj.

During a press conference held with French President Francois Hollande, Al-Sisi said that Egypt backs the Libyan army, led by General Khalifa Haftar, and is willing to provide training to it.

He stressed the importance of supporting the Haftar-led Libyan army to tackle terrorist groups in the country, adding that the passive alternative to this support would be for other countries to fight terror in Libya, which is seen as a hint to possible foreign intervention in the country.

Al-Sisi believes it is important to lift the ban on arming Haftar. The United Nations imposed in 2011 a ban on arms exports to Libya in the context of international sanctions imposed on late Libyan leader Muammar Gaddafi.